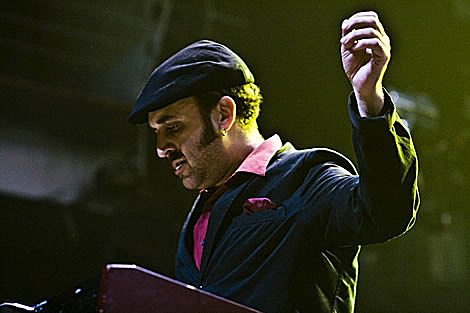 In honor of these pretty new pictures of the Hold Steady, I thought I would post the recent press release with details of Franz Nicolay's new solo album...

FRANZ NICOLAY is that dapper, mustachioed multi-instrumentalist and man-about-town you've seen with such groups as The Hold Steady and World/Inferno Friendship Society. On his debut solo album, Major General, he steps up to the spotlight with a melodramatic grab-bag of full-throated songs, stories, and days of wine & roses; shamelessly strident, stentorian and more than a little sentimental.

With the most famous mustache in rock since Frank Zappa and a look that is reminiscent of a silent film villain, NICOLAY discusses the difference between the man and the music, saying, "About a half-hour before the show, it's time to change: the day suit for the show suit, the casual hat for the show hat. Why? It's like stepping into the phone booth and putting on the superhero outfit: everyone who's ever stepped on a stage creates a character first, a fictionalized version of themselves that can take the cheers or the heat or be the star you may or may not be in the rest of your life. Major General is a record about the difference between melodrama and real drama, that borderline between the private and the public, whether the step is over the doorstep on the way to work or over the footlights on the way to the stage; and the ways you protect that border, the ways it gets blurred, and whether the cheers and jeers stick to the man or the empty suit."

Major General was made in six days, after two rehearsals with the band, a chaotic show at DIY promoter Todd P's Death By Audio warehouse space, and three days of tracking, drinking, and feasting with James Frazee (The Hold Steady). "Jeff Penalty" was produced in a separate session with legendary NYC hardcore producer Don Fury (Cro-Mags, Gorilla Biscuits) at his Coney Island studio overlooking the freak show. FRANZ finished with a few days of overdubs and then handed it off to John Agnello (The Hold Steady, Dinosaur Jr., Sonic Youth) for a proper mix.

FRANZ's solo debut will be released on January 13th via Philadelphia's Folk-Punk label, Fistolo Records. Fistolo is run by Mischief Brew Singer/Songwriter, Erik Petersen, along with the help of his wife, Denise Vertucci, and a small army of rescued pugs. The album will be supported by national touring starting in January that will include SXSW performances during a break from The Hold Steady's busy schedule on the road.