"People on the subway are staring at my scabs" 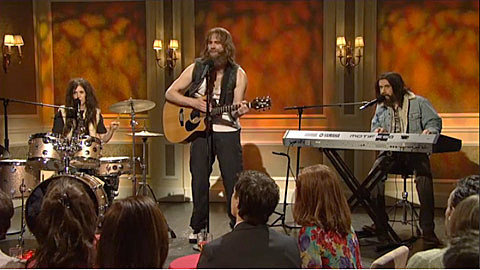 Fred Armisen, Kristen Wiig, and Jim Carrey performed as "A Taste of New York" on Saturday Night Live this past weekend (on 1/8). A Taste of New York is an "authentic" band from "an area between Avenue B & Avenue C" in New York City. And though Holy Sons are from the West Coast, we have learned that the sketch/song was inspired by new Holy Sons song "A Chapter Must Be Closed" from the recent Survivalist Tales. Fred Armisen watched the video for the song and the rest is history. Compare/contrast the videos below.

Musical duo The Black Keys also played Saturday Night Live on 1/8, a few days before they appeared on the Colbert Report with Ezra. Video of both songs they played are below too.

Musical duo Fred Armisen and Carrie Brownstein (ex Sleater-Kinney, current Wild Flag) go way back. Their Thunderant series of videos have been making the rounds online for years, and so it's pretty awesome that they've landed a "6-part IFC Original short-based comedy series" called Portlandia which premieres on Friday, January 21, 2011 at 10:30 PM ET/PT on IFC. "Each episode's character-based shorts draw viewers into "Portlandia," the creators' dreamy and absurd rendering of Portland, Oregon."

Wild Flag is touring in March. Some very funny "Portlandia" videos, and everything else mentioned above, below...

"A Chapter Must Be Closed" - Holy Sons

The Black Keys - Tighten Up on SNL

The Black Keys - Howlin' For You on SNL

Portlandia: Put A Bird on It

Portlandia: The City of Portland

Portlandia: Portland Dream Of The 90s