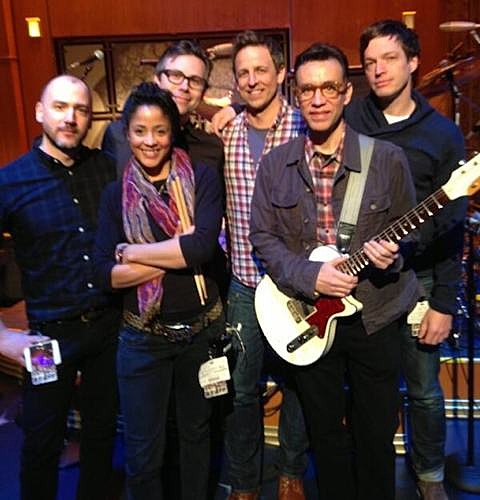 Fred Armisen will be the bandleader on NBC's Late Night with Seth Meyers. The host (and former SNL Weekend Update anchor) tweeted the above picture this afternoon writing, "Fred will curate and lead the band, and continue to run it even when he's off shooting Portlandia." The rest of the band includes Girls Vs. Boys bassist (and big time indie rock producer ) Eli Janney and, as Stereogum notes, that the band looks to include Seth Jabour and Syd Butler of Les Savy Fav. Armisen and LSV are old pals. The new Late Night makes its debut on February 24 on NBC.

The Roots, meanwhile, will remain Jimmy Fallon's house band when he takes over The Tonight Show on February 17. (Keeping Questlove and crew was part of the reason the show is moving back to NYC.) Guests the first week of the show include Will Smith and U2 (2/17), Lady Gaga (2/18), The Arcade Fire (2/20) and, here's a shocker, Justin Timberlake (2/21).