"only in NYC can you see Gotham Green, Black Milk, Freddie Gibbs, DJ Spinna and Tony Touch all rock in the same night." -jessfromcosign

"Jim Jones is at the Freddie Gibbs/Black Milk show. I didn't know he liked rap." - itsthereal 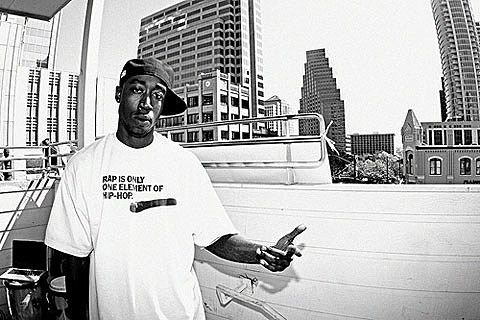 Freddie Gibbs is the Str8 Killa (and a straight blunt killa, but more on that in a sec) and he celebrated his new EP with a show featuring the great Black Milk, Gotham Green, Push! Montana, Tony Touch, DJ Spinna and others last night at SOB's. Check out some videos from the event below.

In other Gibbs related news, odds are you won't see the MC at the upcoming Rick Ross / Diddy shindig at Governor's Island:

Complex: Switching topics: One of the hottest rappers right now is Rick Ross. One of your recent tweets read: "Who are you? Rick Ross, Big Meech or Larry Hoover? the rap game is like halloween every day?"

Freddie Gibbs: [Laughs.] That's real, man. That dude makes good records, but I just can't support no bold-faced lying on records. I guess he's entertaining people. It's like a movie, like Scarface. He can have that fake lane. I'll stay in the real lane. We got a non-fiction lane of rap, that's how I'm looking at it now. So you got that fiction lane over there where they're doing all them. I do the non-fiction, the autobiography, the real shit. It's all good.... I mean you can't really trip on him yelling names out. This the same dude that told you he knew Noriega when he first came out, so...

Ouchie. He goes on to speak on Diddy, Khaled, and many others in the same interview.

As you can see above, Jim Jones was spotted at the Freddie Gibbs/Black Milk shindig. Jones's reunited partner in rhyme (dipset all day, as the kids say) Cam'ron will headline the Funkmaster Flex birthday party next Wednesday (8/11) at BB King's. Look for Killa Cam to perform alongside a team Ja Rule, Capone & Noreaga, Group Home (who just played Brooklyn Hip Hop Fest) and DJ Premier (him too). Tickets are on sale, yuhnahmean? Dig on the remix for "Salute" from Jim Jones's upcoming LP The Capo (9/28 via E1) featuring Juelz Santana, Vado, and Cam'ron above.

Video from the Freddie Gibbs/Black Milk show last night, as well as some of Mr. Gibbs and Best Coast (ex-Vivian Girl Ali included) sharing some ganj at the Pitchfork Fest, is below...