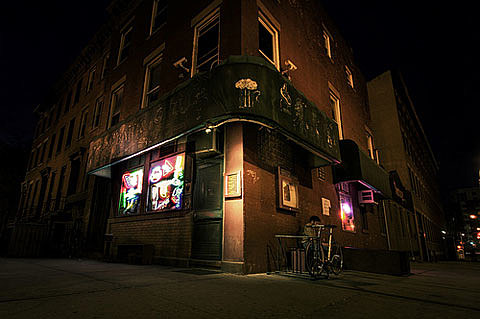 "Today is a sad day for a lot of people who live close to Flatbush Ave. Fort Greene, Park Slope and further. In fact for a lot of Brooklyn. It is sad because Freddy's is closing. It's closing because greedy, glutinous rich people think they know what's best for this neighborhood & are erecting some god awful monstrosity that is going to turn this Neighborhood in to a Manhattan-esque commercial nightmare.

Freddy's is the bar where so many people have partied in Brooklyn. Some have had too much to drink, have danced way too long and accidentally torn muscles. Some even made out with people because their beer goggles were on super tight. But that's what happens when you're with friends creating memories that last a lifetime. To be honest, the fight to keep Freddy's isn't all about these memories. It's about the rights of the people to live in their homes, drink in their bars, and love their neighborhood.

Unfortunately, we lost the fight to big business and millions of dollars. The organizers say a giant arena is supposed to give back to the city. Some people say that Ratner is a huge philanthropist and that the arena is intended to revitalize the community. I'm going to put my money on the memories to revitalize rather than basketball scores.

We're going to miss you Freddy's. You always knew how to make us feel like old friends." [pexy]

The above letter and picture were posted to Flickr by David Pexton, along with the tags "Freddy's Bar", "Bar", "Ratner", "Jay Z", "Fuck You Jay Z", "Eminent Domain Abuse", and others.

Freddy's Bar & Backroom, the Prospect Heights bar forced out by the Atlantic Yards project, had its final nights on Friday and Saturday. Friday was supposed to be the last hurrah, but the bar was open for business on Saturday too... 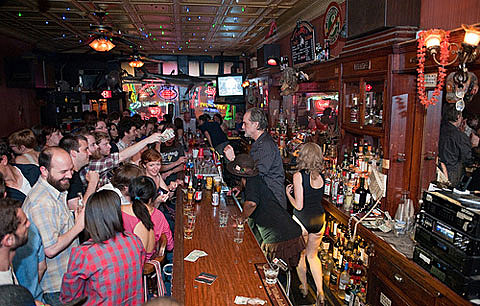 The decidedly upbeat crowd, crammed into Freddy's to celebrate, commiserate, and pay their respects. They treated to ridiculousness that only happens at Freddy's. Speeches by bartenders professing love for each other and fake marriage proposals, a constant stream of women dancing on the bar, a fire dancer that twirled flaming torches and the frequent "DON-ALD! DON-ALD!" chants, cheering Manager Donald O'Finn, that interrupted its dance friendly music selection were just a few of the highlights.

The patrons, who poured in from all parts of Brooklyn and the rest of the City, spanned every age, neighborhood, and ethnicity danced the night away and purposefully ignored the smoking ban, lighting up cigarettes all night long. The ridiculously hot backroom was somehow even hotter as the sweaty band and patrons rocked. [NY Drinker]

That description is from the bar's Saturday night party. Friday's scene was very much the same (though Friday the fire dancer was outside), with the bar already starting to run out of some of its booze. A band in the back played originals and covers (Dylan, etc.) until around 3:30am when the tired staff cleared everyone out. Saturday had a more varied entertainment lineup.

More pictures from Saturday, like the one above, can be seen at Tracy Collins' Flickr. One more, with the full entertainer list from Saturday night (including Alex Battles and a skimpily dressed Anna Copa Cabana), is below.

Freddy's had planned to move to a new location on Union St and 4th Avenue (about 10 blocks into Park Slope), but NYDrinker (the site quoted above) says that playn has fallen through. Admittedly I did get nervous when I read the bar owner's recent (and still posted), and apparently premature, letter that said, "Currently we are negotiating a new location near Union Street and 4th Avenue. We'll be open as soon as time and paperwork allows, hopefully in about 2 or 3 months."

Some videos of the bar's last night (music, dancing, open flames) are also below... 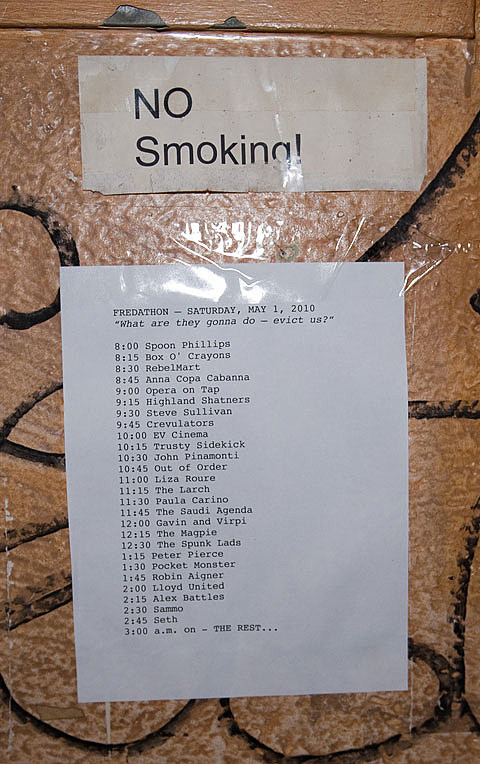 The last night at Freddy's,

Santa Gets Angry at Bruce Ratner at Freddy's Bar - Brooklyn