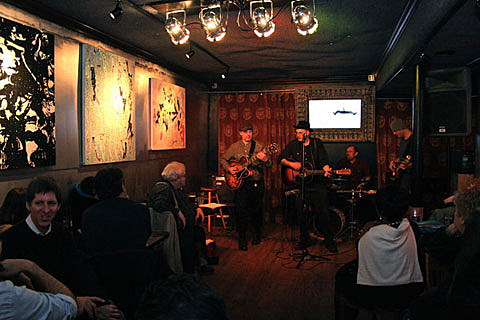 Freddy's Bar, which famously moved to South Park Slope/Sunset Park after being eventually forced to close by Ratner & Co to make room for the new Barclays Center, is not letting Hurricane Sandy control them in the same way. They say:

We here at Freddy's Bar & Backroom have nothing better to do, and no place better to be, so we have decided, to keep our doors open in case Sandy wants to stop by for a party. Also if anyone needs shelter, food, assistance of any sort, or some cheep whiskey.

Brooklyn, NY - October 29 - Freddy's Bar has proven it is not easily scared, time and time again. We survived Bruce Ratner and an illegal relocation, last year's Hurricane Irene (we stayed open for that one too - But she never showed up,) a bad economy and worse politics, so No Blow Hard named Sandy will close our doors.
We are located on 5th Ave between 17th & 18th Street in the South Slope of Brooklyn, 1 block into the safe zone; 1 block from Zone C of the NYC Hurricane Evacuation Map.

To celebrate this Natural disaster, our specialty cocktail will be the 16oz Hurricane Sandy: The recipe is Vodka, White and Dark Rum, Amaretto, Triple Sec, Orange Juice, Pineapple Juice in a pint glass with ice topped with grenadine. Cost is what ever the bartender can get out of you or $10.00. Tonight in the Backroom there will literally be an Open mic, in case anyone wants to rant. We will stay open as long as need be.

That said, seriously, if you go outside be careful and watch out for blowing objects.