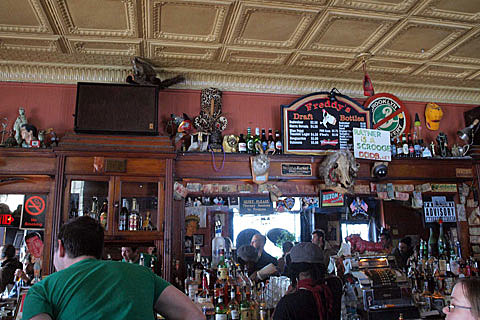 "Hipsters, old-timers, and barflies will raise their glasses at Freddy's Bar for the last time on Friday -- making a final toast to a Prohibition-era watering hole, but one man won't be there: the man whose name is on the awning.

Freddy Chadderton, who sold the bar to its current owner in 1996, lives on Long Island -- but at age 82, he isn't looking back at his salad days.

But Chadderton is one of the few people connected with this bar that isn't crying at least a bit in his beer this week, recalling a neighborhood joint that apparently has to be torn down so that Bruce Ratner can build a basketball arena.

It was indeed a good run." [YourNabe]

Some related videos and a letter from the bar owners, which outlines their plan and hatred for Bruce Ratner, below...

Andy Friedman & The Other Failures - "They are tearing down Freddy's Bar"

April 30th will be the last day that Freddy's Bar & Backroom will be open on Dean Street. We are not closing down, we are preparing to move to a new location. To all the talented performers and musicians that were booked though March and May of 2010, I offer my most sincere apology for the inconveniece. Freddy's owner was forced to consider the future of the business, his staff, as well as his own situation. He made an incredibly difficult decision to pull out of the neighborhood to preserve business by relocating. If condemnation fell upon us we would have sacrificed too much.

Where? When?
Currently we are negotiating a new location near Union Street and 4th Avenue. We'll be open as soon as time and paperwork allows, hopefully in about 2 or 3 months. To assure our capacity to move Freddy's to this new location, we will be moving in a timely manner to "lock down" this new space. Thus we will not face eviction where by a protest by chaining ourselves to the bar might happen. "The Chains of Justice" have served their purpose to raise awareness of our city and states shameful corruption. Our move allows us to keep our employees, serve our wonderful patrons, give talented performers a place that they can call home, and of course to sustain and grow our business.

We are the little guy with a home-grown Brooklyn business. In our fight against legalized corruption and closed-door cronyism we feel we have dealt a blow to billionaire Ratner's abuse of eminent domain. Among currently reported news, Forest City Ratner has recently missed mortgage payments on his Metrotech Center, Ratner's enigmatic involvement in the Ridge Hill bribery scandal, and Prokhorov's business dealings in Zimbabwe that appear to flout US sanction laws. One must ask "Will Forest City Ratner run out of money first, or face prosecution?" Both should happen in my opinion. Hopefully karma, if not justice, will be dealt.

We stand vehemently against "eminent domain abuse." Our lives in Brooklyn have been made a living hell for the past 7 years, solely by this manner of corruption. With a doubtful eye that the Net's arena and affordable housing units will ever be built as purported, all parties that have benefited from this eminent domain abuse and misuse of public funds for personal gain should be held accountable. The lesson we have learned should never be forgotten.

Epilogue
We're throwing a Victory Party on Friday, April 30th to celebrate the little guys who've been fighting a land-grabbing billionaire and the corrupt New York government agencies that he greatly influences. Our email and URL will be the same, but we will have a brand new website. Freddy's is not merely a building on a street corner, it is a grand idea. Freddy's Bar has been the culmination of everything I am and everything I've ever wanted this bar to be. I could not be any more proud of our widely creative community.