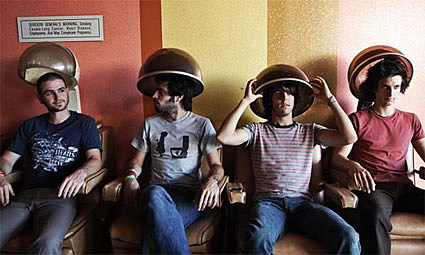 The rub here is freeness: specifically, a free show. We're playing the Mercury Lounge on May 28th at 7 p.m.; it's an invite-only thing and this here blog is your invitation. If you'd like to come, go ahead and email birdmonstertickets@gmail.com and we'll write you a confirmation response, applauding your on-the-ball frugality. Email early, as we have a limited number to spread around. [Birdmonster]

Birdmonster's new album From The Mountain To The Sea will be released by FADER on August 5th. More details below...

From The Mountain To The Sea marks the band's development and growth as songwriters. Breaking away from their previous abrasive style and recording with producer Tom Schick (Ryan Adams, Rufus Wainwright, Norah Jones) at Hyde Street Studios in San Francisco, gave the band the ability to fully expand the sound of the record.

Their latest release shows signs of maturity in the form of subtlety, detail and delicacy. Peter explains, "we wanted to make a record that we could play not just on tour, but would also translate to more intimate settings." The result is a record with the urgency of the band's famed live shows that also builds quietly into a vivid landscape of honest sincerity. Peter accounts on New Country "We grew close with our roots tangled and the soil right up to our knees / You might bend with the breeze / You just might break my heart in three."

The addition of Birdmonster to FADER Labels' ever-growing roster of innovative international talent is an exciting step for both into new territories. Joining the ranks of critically acclaimed artists such as Editors and Saul Williams, Birdmonster is set to become an important part of this diverse music family.