This might explain why Patti Smith's Bowery Ballroom shows sold out so fast. They're giving away free Bowery tickets with the purchase of Patti's new CD "twelve" at eight different NYC stores. It worked the other way around too - you get a CD if you bought a ticket first. More info below.... 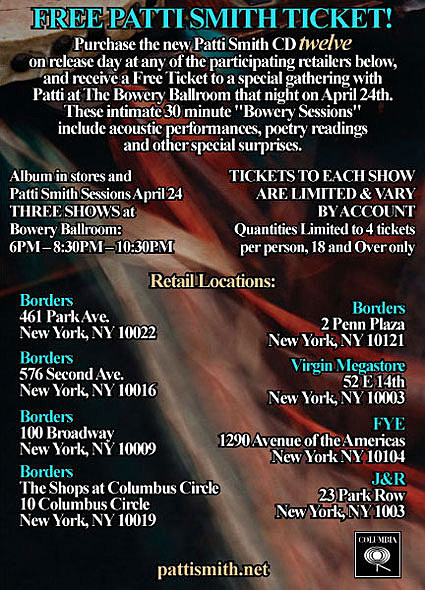 The shows are only 30 minutes? That sucks. The start times are spaced two hours apart. Do the people who bought the 3-show pass have to sit around all that time to get a total of 90 minutes of show?

Twelve is Patti Smith's first album of new studio recordings since trampin', her Columbia Records debut, was released in 2004, and is the artist's first-ever full-length collection of songs originally created by other performers.

On Twelve, Patti Smith and her band -- Lenny Kaye (guitar), Jay Dee Daugherty (drums) and Tony Shanahan (bass, keyboards) -- work their magic on a surprising selection of classic songs and overlooked treasures from the rock & roll canon including "Pastime Paradise" by Stevie Wonder, "Everybody Wants To Rule The World" by Tears for Fears and "Helpless" by Neil Young. Also on Twelve, Smith and company interpret songs by Jimi Hendrix, Bob Dylan, the Doors, Nirvana, Jefferson Airplane, the Beatles, the Rolling Stones, the Allman Brothers, and Paul Simon.

Patti Smith, whose seminal rock & roll album, Horses, was released in 1975, was presented with the prestigious insignia of Commander of the Order of the Arts and Letters by French Cultural Minister Renaud Donnedieu de Vabres at a ceremony in Paris on July 10, 2005. Cited as an esteemed rock & roll poet laureate, Patti was praised by the French Cultural Ministry as "one of the most influential artists in women's rock 'n' roll." The citation also noted Smith's deep appreciation of the 19th century French poet Arthur Rimbaud.

While her groundbreaking vision of "three chord rock merged with the power of the word" has ensured her place in rock & roll history, Patti Smith has, throughout her career, developed a reputation as one of pop music's foremost interpreters, visiting the songs of other musical artists and transforming them through the lens of her own understanding, appreciation and imagination. Beginning with her first single, "Hey Joe," in 1974 and her extrapolations of Van Morrison's "Gloria" and Chris Kenner's "Land of 1,000 Dances" on her seminal Horses album in 1975 through her live performances of songs ranging from "You Light Up My Life" to "My Generation" to her new album, Twelve, Patti Smith continues to reshape popular music's classic source materials and make them her own.

Track Listing
1. Are You Experienced?
2. Everybody Wants To Rule The World
3. Helpless
4. Gimme Shelter
5. Within You Without You
6. White Rabbit
7. Changing Of The Guards
8. The Boy In The Bubble
9. Soul Kitchen
10. Smells Like Teen Spirit
11. Midnight Rider
12. Pastime Paradise