Painting of the Jamaica Bay Wildlife Refuge by Dave Taft 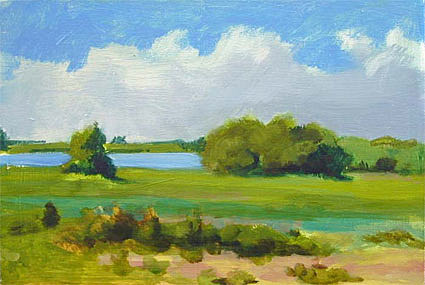 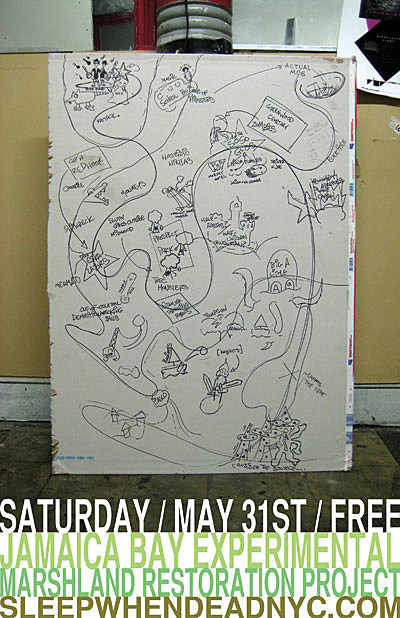 So… here’s the deal. SleepWhenDeadNYC, Entertainment4Every1, and showISmonster are joining forces this weekend to bring you something completely ridiculous.

On Saturday, May 31st, at 1pm, The Beets will begin playing on the end of the W 4th Street Station for the Rockaway (downtown)-bound A Train. As friends and followers congregate, and The Beets finish, we will all get on the last car of said downtown A Train together, and begin the long journey towards Broad Channel. While we travel, The So So Glos will serenade us red-light-green-light performance-style as the train doors open and close and we party while avoiding cops the entire way. After they’ve finished, The Eskalators’ gang of 10+ musicians will fill the train and carry us past The Racetrack, The Airport, and finally across the waters of Jamaica Bay, in the middle of which sits Broad Channel, an island inhabited solely by firefighters and they’re families. This will not deter us.

*note to those who come late… pay careful attention to get on the “FAR ROCKAWAY”-bound A Train, NOT the “Lefferts Boulevard”-bound A Train. This will take you to a terribly wrong place and waste your precious time…

Once arriving on Broad Channel, we will parade through this Firefighter Wonderland, and at the end of the island is the long anticipated Jamaica Bay Experimental Marshland Restoration Project, home to many species of birds and marsh wildlife, plus, for this afternoon; Radiates, Thompson, Puttin’ On The Ritz, Fiasco, Consider The Source, possible impromptu performances on the beach, and as the sun descends on this far tip on New York City, Big A little a and KNYFE HYTS.

Prepare. Band info at the bottom.

[Back of downtown A Train platform…]

Puttin’ On The Ritz

If you’re at all confused, which is possible, but excited, which is likely, email zombie@sleepwhendeadnyc.com immediately :)

“… Multi-percussionist choreographed noise & flashing lights & sweat & (most of the time) stationary marching band explosion. Increasingly complex an musical. “Aa (big a little a) a very beautiful way of shifting its center in unexpected ways. A fat tableau of the kindsa sounds that young people should be making and enjoying in bistros from here to Kalamazoo. Here they club out bite-sized hunks of neo-no, new-wave-electro-murk, disco-noise readymades, French duck calls and a buncha other stuff. And it sounds quite pleasing!” - Thurston Moore, Arthur Magazine

“Three musicians converging on an epic plateau of sound and reflex. Three conscious minds communicating on subconscious levels. Consider the Source is one voice born of three distinct personalities. Their music is aggressive and yet serene, powerful, and honest. They play what they feel and demand your full attention. Love ‘em or hate ‘em, the one thing they won’t let you do is ignore them. Since its inception, the band has performed throughout New York and much of the east coast. Consider the Source was as well received opening for Wyclef Jean as they were at Klezmer jams on NYC’s lower east side. Together they’ve traveled to the middle and far east to open their ears and expand their musical palate’s. Their spicy blend of progressive ethno-fusion proves to be truly genre-bending. On stage, the members embrace and express their deep love and appreciation for their music and influences. From Eastern-European folk melodies and Indian rhythmic cycles to funky rock riffs and break beat drum & bass, audiences can’t decide whether to mosh, rave or belly dance.”

… thrashy mathy screamy core made by three kids who grew up in Brooklyn. “Brooklyn’s fiasco rock the rapid-fire punk strums played at eighty-eighty miles per second… to create orchestrated chaos…. There are ‘kid bands’ and then there are bands who happen to be kids. fiasco are the latter. This is no Menudo…. Make no mistake, this is punk rock. But there’s definitely a Strokes-y element to their vocals that make their noise pretty melodic, too…. If Thurston Moore likes Be Your Own Pet (which he does, since he signed them) then he will LOVE these guys.” - Oh My Rockness

¡PUTTIN’ ON THE RITZ!

“For anyone who’s torn between thrashing and crooning, rejoice: Puttin’ on the Ritz thoughtfully lets you have it both ways. Started in a drunken haze at a friend’s party in ‘04, the band is the creation of drummer Kevin Shea and singer B.J. Rubin, punk fans who happen to love the standards (Shea even studied jazz at one point). Though Rubin hilariously howls through ballads like “The Rainbow Connection,” “My Funny Valentine,” and “The Girl from Ipanema,” he insists that POTR are sincere: “While most bands who do these songs sound dead, we try to explore it more and be off-the-cuff.” They rehearse only once or twice a year (Shea plays in several local experimental bands the rest of the time), but they’ve managed to get a gig opening for hotshot guitarist Marnie Stern and have landed several U.K. shows for the fall. (They’ve also performed in waist-deep water at Coney Island and at a few other gigs where they were threatened by non-fans.) They’re even amenable to recording duets with fellow crooners like Tony Bennett, assuming he’d like to split studio time with them.”

“Punk kids from BK who’ve played half the hole-the-walls you’ve never heard of. They’re, like, 17 or 16 or something, and already are organizing shows in every parent’s basement that’ll let ‘em.”

“The high school marching band gone horribly, horribly wrong, but in the trendy, actual marching band music sort of way. A shifting cast of 10+ band members making pop-ska nuggets of ernest and hilarious lyical genius. Shit, I love these guys a lot, and they’ve barely started. Their an awesome band, so go find out despite my fanboy mumbling.” - SleepDead

“On stage, they’ve stripped off the smart, asymmetrical black leather jackets they were sporting on the street, but The Glos’ punk-battered energy rips through in every energetic, relatively untrained and howlingly harmonized shout. The listeners stuck in the back of the small crowd, likely unable to really see the Glos as they pivot and thrash on the floor--mere inches from the audience front row of the audience--could take away all they need to know from listening alone. Though they mock their own personal form of practiced vanity, it’s a sonic (not sartorial) style that ultimately defines them.” - New York Press

“Garage rock with a bright sunny exterior and a dark, bitter inside; like a twinkie gone bad after six million years in a bomb shelter” - SleepDead

If you want more stuff like this in your life, check any of these websites. They’re all golden.