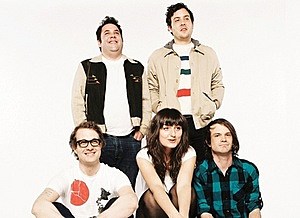 After moving their show from upstate to Brooklyn Bowl which was then followed by a 50% reduction in ticket price, Saturday's Daytrotter show is now not happening at all, as the bowling alley venue has cancelled all Saturday and Sunday shows "due to the hurricane. Ticket refunds will be offered." No bowling or food on those days either. Affected artists include JBM, We Are Augustines, Guards, Doug Paisley, Des Ark, Christopher Paul Stelling, The Loom, Williamsburg Salsa Orchestra and (DJ) Talib Kweli.

Daytrotter's Monday show at the Living Room is still on though, and you can head to Brooklyn Bowl tonight (8/26) for a free show by Slowdance. The Dex Romweber Duo and Birds of Avalon show tonight was also cancelled, but that was a coincedence.