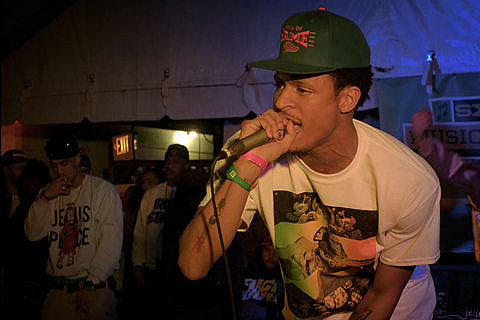 Summerstage presents free shows in parks around NYC each summer. One of those parks is Red Hook Park where 2013 shows will happen on June 4 - 7. Check out the exact schedule below...

Flatbush Zombies / The Underachievers
Built by MeanRed and presented in association with MoCADA's Soul of Brooklyn Initiative
Part of the "This is __ Hip-Hop" series
Tuesday, June 4, 2013
Red Hook Park, BK
7:00 PM - 9:00 PM
Artist Website: .http://flatbushzombies.bandcamp.com/
Shocking, hilarious, sometimes revolting, and yet completely endearing, the Flatbush Zombies are a genuine mystery in a musical landscape where few still exist. Meechy Darko and Juice, Brooklyn bred youth with a penchant for gold grills, Charles Manson and dropping acid, make up the high energy trio alongside producer and lifelong friend Erick Arc Elliott.

The Zombies rose out of complete obscurity on the back of a synth heavy, weed laced banger entitled "Thug Waffle," an ode to marijuana and breakfast foods which immediately propelled them to the forefront of New York's fresh crop of talent. Their first full length mixtape, D.R.U.G.S. (July 2012), released with over 50,000 downloads in the first week and provides the backbone for their hypnotically abrasive and off the wall live show.

Marlong Fung and Akeem Joseph are The Underachievers, but don't be fooled by the name. Better known as Issa Krishna Dash and Ak, the two Brooklyn natives began making music a little over a year ago with a goal of enlightening those who chose to listen. It's Dash and Ak's vigorous lyricism and introspects that attract listeners as their melodies and vivid visuals become the icing on the cake. In the summer of 2012 the duo released their first visual for "So Devilish," which became an instant hit. A month later, the release of their second single, "Gold Soul Theory," would prove these two were in fact, no underachievers. Their third duet, "Herb Shuttles," kept them on top as listeners began realizing they were here to stay. Unlike any other Hip-Hop duo, these young MC's really take the elements of the genre to another level.

Rakim
Hosted by Lyricist Lounge
In association with MoCADA's Soul of Brooklyn Initiative
Part of the "This is __ Hip-Hop" series
Wednesday, June 5, 2013
Red Hook Park, BK
7:00 PM - 9:00 PM
Legendary Hip-Hop artist Rakim's iconic album, Paid in Full has garnered praise from outlets such as Rolling Stone, who has deemed it, "the greatest Hip-Hop album of all time." Few artists have had as great an impact on the development of the genre as Rakim. Recognized as one of the "Masters of the Microphone" he first exploded onto the scene with the release of the iconic single, "Eric B. is President" which showcased his intricately intellectual lyrics.

Website: http://lyricistlounge.com
SummerStage celebrates the acclaimed Hip-Hop brand, Lyricist Lounge. A respected part of Hip-Hop music and culture, Lyricist Lounge has hosted hundreds of live showcases featuring the best up and coming talent while acting as a career platform for many of today's superstars

Built by MeanRed and presented in association with MoCADA's Soul of Brooklyn Initiative
Thursday, June 6, 2013
Red Hook Park, BK
7:00 PM - 9:00 PM
Releasing numerous records a year under his own name, Ty Segall has formed a new outfit, Fuzz, with Charlie Moonheart, who has played in his live band (they were also both in Epsilons). In Fuzz, Segall sings but is on drums and like their name implies, this is the kind of thick and heavy Rock that descends straight from Jimmy Hendrix. The band's debut single came out covertly, with no mention of the band members and sold out its initial vinyl pressing. Both songs, "This Time I Got a Reason" and "Fuzz's Fourth

Cristela Alonzo has appeared on COMEDY CENTRAL's "Live at Gotham" and "Gabriel Iglesias Presents Stand-Up Revolution," Showtime's one-hour special "Legally Brown" and a semifinalist on NBC's "Last Comic Standing." She has also worked as a correspondent for MTV.com and an award-winning writer of a number of short films that have won numerous awards including Best Movie at the Boston Comedy Festival. Alonzo's first stand-up special "Cristela Alonzo: The Half Hour" premieres the night of her performance at the Red Hook event on Friday, June 7 at 12:30 a.m. on COMEDY CENTRAL.

Mark Normand, born and raised in New Orleans, is a comedian based in New York who recently appeared on TBS's "Conan" and won Carolines March Madness competition, beating out 63 other comedians. In 2012, Mark appeared on COMEDY CENTRAL's "John Oliver's New York Standup Show" and taped the pilot of "Best Week Ever" for Vh1. He also appeared on the most recent season of "Last Comic Standing" for NBC. Normand was named one of COMEDY CENTRAL's "Comics To Watch" at the 2011 New York Comedy Festival, Esquire's "Best New Comedians 2012", Sidesplitter's "Top 10 Up and Coming Comedians on Each Coast" and Time Out New York's "21 New York Comedy Scene Linchpins."