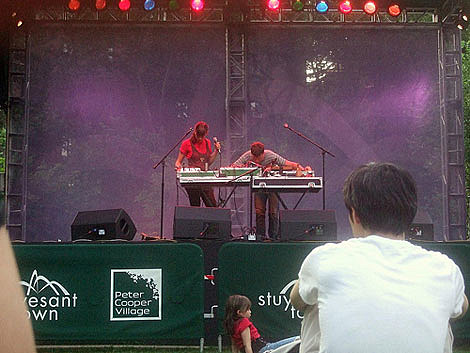 High Places were one of the bands to play Stuyvesent Town's Music on the Oval series last year. This year's series will run Wednesday nights June 10th - July 15th...

Music on the Oval will feature free family-friendly concerts at 7:00 p.m. New Yorkers and visitors will groove to a different pre-show DJ each night starting at 6:00 p.m...The Stuyvesant Town Oval is located between 16th and 18th Streets and Avenues A & B and the entrance is off First Avenue and 16th Street.

We already mentioned that Jay Reatard is the family-friendly artist playing there on July 1st. Kaki King, The Budos Band and a few others are playing there this summer too. Full schedule below...

Music on the Oval 2009 Schedule

* June 17 - Phenomenal Handclap Band - The group combines the best attributes of Brooklyn's underground music scene, circa 2009: the chops to emulate an encyclopedic knowledge of rock and pop history, plus the love of disco to make the whole thing boogie-able. DJ Duane Harriott will get the crowed warmed up.

* July 8 - Forro in the Dark - From the international state of the Lower East Side, comes Forro in the Dark, the Big Apple's pre-eminent practitioners of forro, a northeastern Brazilian party music part samba and part country soul, that's been setting Nublu a-dancing since 2002. (David Byrne approved!) DJ Probus will get things started.

Kaki King also has a show coming up at Glasslands.