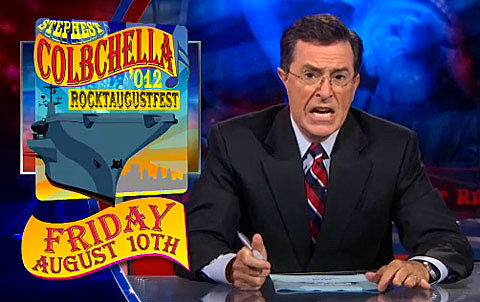 Last night Stephen Colbert, in an effort not to be outdone by Coachella and their impending expansion into cruise lines, announced the second edition of his own music series will also be on a boat...though not one of those sissy luxury liners. Only the most American of vessels can contain Colbert, that's why you can look forward to the StePhest Colbchella '012 aboard the Intrepid aircraft carrier on August 10th.

Don't worry, Colbert is hip to all of the cool bands ("like Bonnaroo and Lollapalooza, those guys are great"), so you can get excited for appearances from The Flaming Lips (who recently played Firefly), Grizzly Bear (who have a new LP on the way), Santigold (who plays Fun Fun Fun Fest this year in Austin), Grandmaster Flash and Billboard Singles Chart toppers Fun, and will be FREE/open to the public, though tickets are required (available via the Colbert site). Check out the announcement from his show last night below.