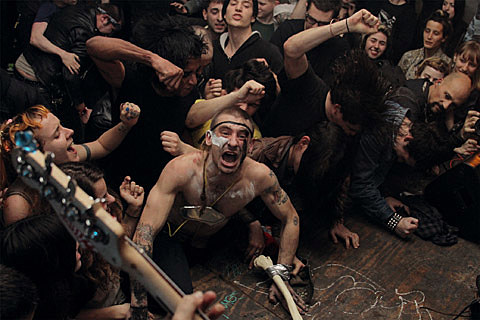 15th Annual TromaDance Film Festival happens in Brooklyn June 27 & 28 at The Paper Box. Like the films that Troma and its president Lloyd Kaufman, are known for, there is little in the way of industry BS:

TromaDance is the first film festival wholeheartedly devoted to filmmakers and fans. Unlike every other film festival, TromaDance does not charge filmmakers to submit their films. Entrance to all screenings is free and open to the public. Also, there are no VIP reservations or preferential treatment regarding films, panels, or parties of any kind given. The organizers of TromaDance believe films are meant to be seen, especially when it comes to new filmmakers. Art - in all its forms - is for the people!

As for what kind of films, to expect, the press release adds:

TromaDance features a range of films made independently, usually without big stars, big money and far removed from the Hollywood studio system. The official selections of TromaDance have been made with nothing more than passion, courage, integrity, and raw talent.

Probably also a lot of cheap thrills horror, blood, guts and raunchy humor. Most of the films are shorts,and the full lineup of films is listed below. Check TromaDance's website for schedule, trailers and more details.

Additionally, there is an afterparty happening Saturday (6/28) at Paper Box, featuring NYC punk luminaries Dawn of Humans, plus Hellbent Hooker (members of Mutilation Rites and Ramming Speeed), The Netherlands and Mannequin Pussy. The Facebook event pages say "come party with Lloyd Kaufman" and what horror fan could turn down that invitation? The show starts at 10 PM and is technically free, but a $10 donation is suggested.

TromaDance film lineup is listed below... 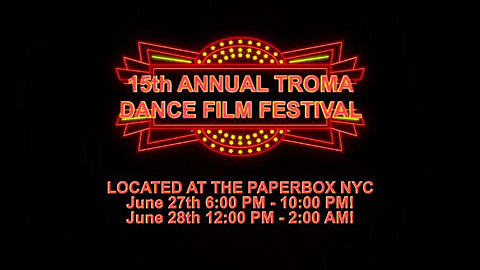 When Chip returns home to visit his beloved mother, he finds himself caught in the middle of an interstellar war between a telepathic space alien and a bureaucratic government organization bent on incinerating all alien life.

A group of young martial artists infiltrate an underground pit fighting ring where the loser is chopped up and served in a Chinese restaurant.

While holidaying in Romania, photographer Alex is hit by a car and is badly hurt. Following an operation he returns home to work on his new exhibition but his recovery is hampered by strange side effects - sensitivity to light, a taste for raw meat and disturbing hallucinations. When challenged by his concerned wife about his erratic and increasingly violent behaviour he confesses that he believes he is turning into a vampire.

Nightsatan and the Loops of Doom
Directed by CHRZU
Finland

In the year 2034 Karelia has reduced to deserts. On these plains territorial disputes are settled with sound and music. A pack of synthesizer warriors known as Nightsatan are pursuing a damsel in distress, who has fled her captor into the dunes. They wander into the habitat of an unknown musician, who enslaves his victims in his programmed choir. Nightsatan is challenged by a worthy adversary. Nightsatan is a real band from Turku, Finland, playing Laser Metal on synthesizers and electric drum pads in the vain of 80's cult movie scores.

A hard-boiled crime noir, set in a world where everyone is a clown.

Abandoned on the side of the road in the Land of Death, Alfred the dog wanders into a Dead Girl Strip Club to cure his broken heart with hard liquor. But when you linger too long in a bar filled with the dead, you tend to want to stay there ... forever. Just as Alfred is about to pull the trigger and end it all, he is saved by the light of a luminous, electrically-powered corpse stripper. But all is not as it seems when the angelic stripper turns out to be nothing more than a maggoty pile of bones and Alfred remembers he's just a horny necrophiliac waking up in his own vomit again. He's Alfred Alfer, the sick puppy who crashes funerals, raids morgues, and masturbates with severed hands in a musical homage to GG Allin.

All You Can Eat
Tommy Groth
USA

In a small town lives an ordinary clown with an extraordinary secret.

Behind The Bush
Yoann Luis
France

Humiliation and violence punctuate the life of this broken man. The silence is his refuge, the perversion his outlet.

A bounty hunter with a traumatic past must keep he sanity and her bounty alive.

A family's quiet Christmas turns to Hell when the pets decide to overthrow their abusive masters.

Cholera: an acute and infectious epidemic of the intestines.

Whilst having sex in a park, a couple gets chased by zombies.

The manager of a company proposes a bold plan to keep up the morale of his employees.

Meat, three ladies, a butcher and his son... Can they make the suitable receipt to come out of the crisis?

A mysterious duo partakes in a disturbing Halloween tradition.

One lonely Friday night Andy performs a blood ritual to get a girlfriend.

A day in the life of a Lego figurine.

A Finnish Jan and a Latvian Daina are smuggling organs from Latvia to Finland and they are traveling there through Estonia. The couple stops to eat in a small restaurant by the road. Something unexpected happens and their stay lengthens.

Bea and Alan live in a bunker. She wants to have a child. He does not. They manage to live as comfortably as they can, trying to understand each other, sheltered from an apocalyptic world. Their food resources, though, are not going to last much longer...

An 11 year old kid from the roughest part of Montreal who lives life according to his own rules, under the label of the Hurricane.

A dark comedy about a regular guy who has to convince God not to destroy the world.

A man wakes up with a tree between his legs and must pleasure it to go about his day.

PAPERBOY is back... with a VENGEANCE!! Gaming meets Grindhouse... direct to VHS!

Albert has a nasty habit of freaking out his wife by pretending to die until it takes a macabre turn.

Two priests attempt to exorcise a boy possessed by lotion, tissues and sin! Oh my!

A young bride has no friends so her brothers throw her a bacherlorette party. Throughout the night, secrets are revealed which erect a throbbing, surreal and sexual drama.

The Carriage or: Dracula and My Mother
Ben Gordon
Spain

The Christmas cheer soon evaporates upon the appearance of a sinister carriage.

A boy goes missing in the icy wilderness, feared taken by wolves. A hunter undertakes a journey to find the boy; dead or alive. As the hunter tracks the boy into the mountains, he discovers that his instincts can no longer be trusted. Here, far from civilization he must make decisions that will forever change his relationship with the wilderness he has always feared.

A pizza shop employee finds himself trapped in the restroom during the Lovecraftian apocalypse.

A private investigator, hell-bent on finding the killer of his partner, finds an answer bigger than he could imagine, apocalyptic in nature.

Louis tries to be a good man, but he is a vampire.

A man tries to kill himself but with every attempt, something goes wrong.