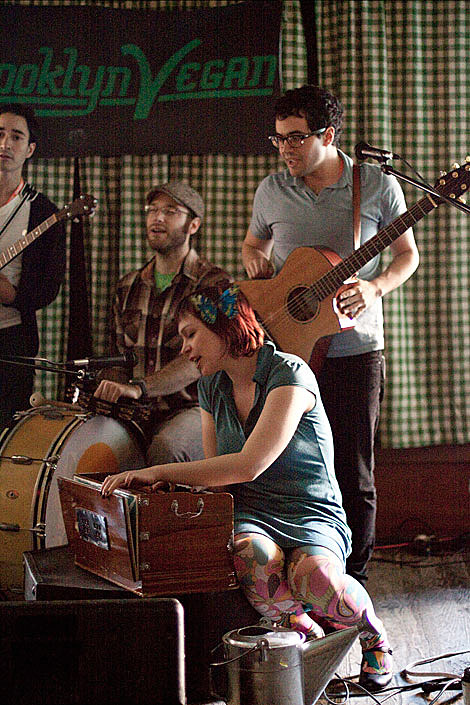 Queens' Freelance Whales were one of the stand-out acts at this year's CMJ. The still-unsigned band played a number of shows, including the BV Pianos day party on Thursday, October 22nd, where they played a very applause-worthy, acoustic set of feel-good indie pop in the venue's upstairs to a large crowd for 1pm on a weekday. Among the many instruments they had with them: a watering can. Picture above. Another picture and some videos below.

Freelance Whales sang anthems for the utterly diffident: "We could be friends/We have several interests in common." Quavery high lead vocals, banjo picking, march beats and the inevitable glockenspiel were elevated by crescendos that were no less effective for being so methodical, each verse thickening with countermelodies from synthesizer and guitars. Sure, Freelance Whales -- really, it's not too late for a band name change -- is glancing over its shoulder at Arcade Fire, but in song after song, twerpiness discovered its own dignity.

The band, whose self-released debut, Weathervanes, came out in September (tracks from it are above), are doing well for themselves without a label (though that probably won't be their status for long). They're set to head out on a six-week tour with Fanfarlo that starts Nov. 9th in Chicago. The tour finishes with a show at Webster Hall on December 18th. Tickets are on sale.

Before they leave, Freelance Whales will play a pre-tour, kick off show at Pianos on Friday, November 6th with Radical Sons and The Invisible (who are also playing two other NYC shows while they are here from the UK). Tickets are on sale.

Videos from their acoustic set at Pianos, and all tour dates, are below... 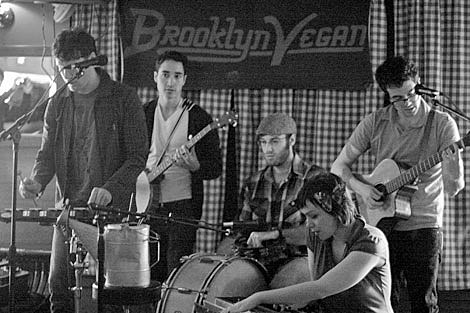