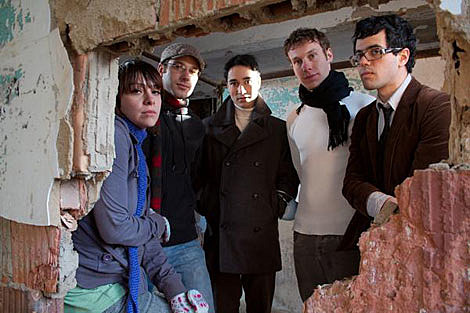 Freelance Whales' six-week tour with Fanfarlo ended on Friday (12/18) with their show at Webster Hall. Pictures from that show are currently stuck on a memory card in some distant airport after finally making on an airplane that was delayed due to the snowstorm. Videos from from that show, including an interview where Fanfarlo's Justin Finch admits to the band that he's planning a Fleetwood Mac cover project (though someone already beat them to it), are below.

Freelance Whales' Weathervanes will get a re-release in 2010 (March 16th to be specific) through Frenchkiss & Mom + Pop Records. To sweeten the deal on that record (which has been out since before CMJ) the band has also "worked really closely with our favorite chilean illustrator/animator Joaquin Cocina, in making a little wordless storybook to go along with the record." There's a preorder, with other treats, available now.

Still Life Still's 2010 plans include four-nights at Mercury Lounge in January, followed by a tour with Wild Beasts (which comes to Bowery and MHOW at the end of February). For one of those Mercury Lounge shows, the Wednesday, January 20th one will be headlined by Freelance Whales and will also feature Animal Tropical. Tickets are on sale. Other bands playing with SLS are Des Roar and Dead Sparrows on January 6th, Hypernova on January 13th, and Blip Blip Bleep on January 29th. No advance tickets for those.

Speaking of Fanfarlo - the band's website is hosting a digital Advent calendar. For each day (leading up to X-mas) the band offers up new artwork, blog posts and special performance clips like the goodie of today (12/21) - where the band plays a Christmas song while stuck in traffic en route to NPR in D.C. (the following NPR office show was posted already). That Advent video and all tour dates are below...