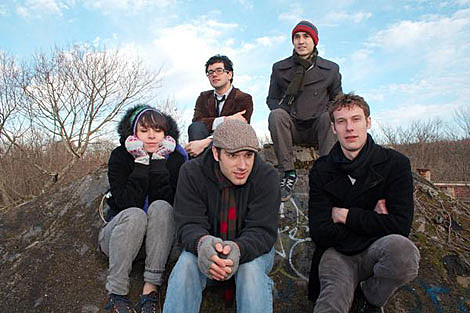 Who are Freelance Whales? They're a five-piece band from Queens that started up in late 2008 and has already put out their first, self-released full-length, weathervanes, which came out in September on iTunes. The band's varied indie-pop has a humble, homespun quality to it. They lean on banjos and xylophones for tender rural sounds but also use glitchy and elecro backing to good effect. Check it out in the tracks off their LP posted above.

Freelance Whales will be busy during CMJ. They play Wednesday (10/21) at Bowery Ballroom with Fanfarlo (who play tonight at MHOW), Midnight Juggernauts, The Postelles, TigerCity and Findlay Brown. They also play an acoustic set at the BV day party at Pianos on Thursday (10/22 - full details soon), and they have a gig at the Bell House later that night for the Gothamist showcase (with Uninhabitable Mansions, Robbers on High Street, Pomegrates and more). They also play Saturday at the Delancey's Deli Magazine/This Side Up/Young and Hungry party. All dates below.

In the clips below, the band sounds equally crisp on an abandoned Staten Island farm as on the Bedford Avenue L train platform, and there's a nice Sufjan vibe the song "Broken Horse." See those and all tour dates below...

A little more of Freelance Whales in the Bedford Ave. Station