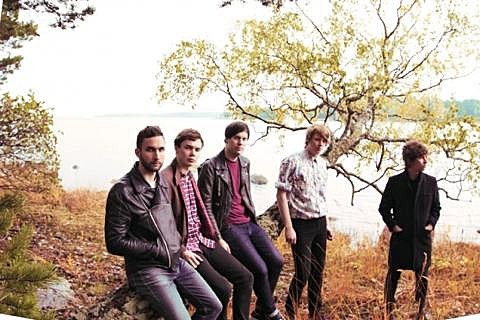 As mentioned, Finland's French Films are coming over for NYC Popfest this weekend, playing the big, all-day show at Littlefield on Sunday (6/2) that also features Close Lobsters, The Wolfhounds, The Orange Peels, Alpaca Sports and more. Tickets are still available but is, I'm told, nearing sell-out.

If you can't make it Sunday but would like to see them, French Films are playing three more additional shows while in NYC: June 3 at Cake Shop; then Mercury Lounge on June 4 with Toronto's Hooded Fang, Total Slacker and Pow Wow! (tickets); and finally Glasslands on June 5 with The Secret History, Hints and Pains of Being Pure at Heart's Kip Berman on DJ duty (tickets).

French Films just released their new album, White Orchid, which is one of the better indiepop-leaning albums I've heard in a while. While there is some '80s pop in there (the singer sounds a bit like OMD's Andy McCluskey), they definitely aren't revivalists. (If you sometimes like The Drums but find them to be a little much, French Films may appeal to you.) This is energetic, extremely hooky pop and you can stream single "Latter Days" below listen to the whole thing on Rdio and Spotify.

Dates and streams below...

Filed Under: Bill Pearis, French Films, Hints, The Pains of Being Pure At Heart, The Secret History
Categories: Music News, tour dates
Comments
Leave A Comment
Back To Top