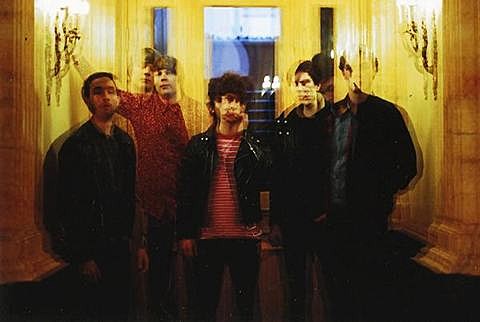 As mentioned, the 2013 Popfest (May 30 - June 2) announced their line-up last week which includes a stellar array of vintage names (Monochrome Set, Close Lobsters, The Bats) as well as a nice crop of new bands (French Films, The School, Ringo Deathstarr) as well. The fest has now announced the actual nightly schedule which is as such:

Friday, May 31 at Knitting Factory: The Monochrome Set, Math & Physics Club, Cassolette, and The Very Most (tickets)

Saturday, June 1 (night): Popfest takes over both stages of Public Assembly with The Bats, Tigercats, The Hobbes Fanclub, and Azure Blue (tickets); the backroom has Ringo Deathstarr, Flowers, The Proctors, The Ballet (tickets)

Four-day passes, which gets you in to everything, are available too. If you don't recognize some of the names on this year's line-up, Popfest has a handy Spotify playlist featuring all involved.

I've been listening to Finnish band French Films a lot recently who'll make their U.S. live debut at Popfest. They've got a manic pop vibe to them that posits them somewhere between early OMD and The Drums. You can stream their 2011 album, Imaginary Future, below. They'll release their new album, White Orchid, in time for Popfest and you can stream the first single, "Latter Days," below.