photo: Down at Best Buy Theater in 2012 (more by Greg Cristman) 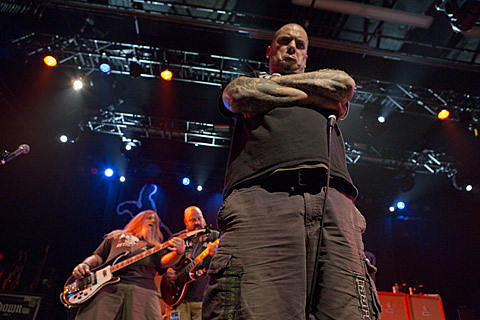 The fallout from Phil Anselmo's racist actions at Dimebash continues, and now the French government is getting involved. Down are scheduled to appear at Hellfest in Clisson, France, a huge metal festival which relies on a certain amount of funding from the local government. Now, according to Metal Injection, the government, led by senator Bruno Retailleau who represents the region of the country that hosts Hellfest, are threatening to pull that funding if Down is allowed to stay on the bill, claiming that their presence would constitute a violation of French anti-hate speech laws.

Anselmo apologized repeatedly. He even offered to leave the band to do no harm to his comrades, who must also be disgusted with what happens. Everyone agrees that this is unacceptable and that the metal scene is neither racist nor anti-Semitic. I know Phil Anselmo very well, who came many times to Clisson. And I am convinced that his apologies are sincere. Hellfest, we never had this kind of behavior, no one has ever seen or wear distinctive sign or speech, both live and in houses. I deeply believe that he is a good person. He is a provocateur who plays the big guys and loses foot when he's drunk. He made a huge mistake. But people who make populist shortcuts and say horrors when they have three grams of alcohol, one can find many, including Vendee.

Barbaud did add that it's still possible Down could cancel the appearance on their own. Stay tuned for any updates.

Meanwhile, Anselmo recently made another public appearance that was maybe (?) intended as an extension of his apology. He joined the black R&B group The A League on stage at the Atlanta karaoke event Scaryokee when they sang Boyz II Men's "End Of The Road." He didn't sing with them (he ended up doing a Smiths song on his own) but he danced and put his arm around the members and led the crowd in cheering for them. Make of it what you will. The video is below.

Scaryokee definitely lived up to the hype tonight