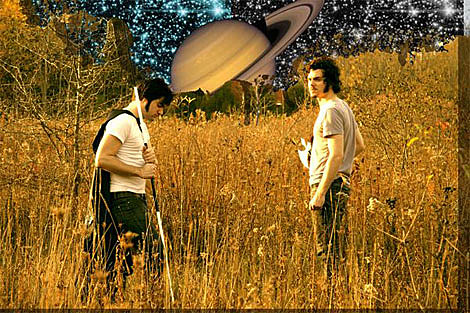 "David Perlick-Molinari [of French Horn Rebellion] is mates with MGMT, having produced and engineered their Time to Pretend EP as well as a "wacky" version of Electric Feel; he describes both projects as "really fun" and his "saving grace", since at the time he was composing music for commercials and "feeling very depressed about the world". [French Horn Rebellion, a duo of brothers, are] an odd pair, and no mistake, the Perlick-Molinari boys. The younger one, Robert, is an accomplished French horn player who became "principal horn chair" of the prestigious Northwestern University Symphony Orchestra, which sounds impressive even though we have no idea what it means. When they were kids their mum bought the boys an early form of Logic for their computer in the belief that they would use it to "compose classical music and make arrangements for Broadway hits". They got as far as forming a Ben Folds Five covers band in high school. They explain at great length why they chose French Horn Rebellion for their name - "the French horn is the central reason for why the band exists" - but we still can't work out if any of their songs feature said instrument." [Guardian]

French Horn Rebellion (as previously profiled by Bill) have announed some upcoming shows, most notably, February 6th at Music Hall of Williamsburg with Hot Chip. Stay tuned for ticket information for the show that happens three days before the release of Hot Chip's new album. In the meantime, grab tickets (currently on AmEx presale) for the just-announced 2nd Hot Chip show at Terminal 5 which now has an opener: Gang Gang Dance (who themselves have a show at Music Hall of Williamsburg this Friday).

All FHR dates below...