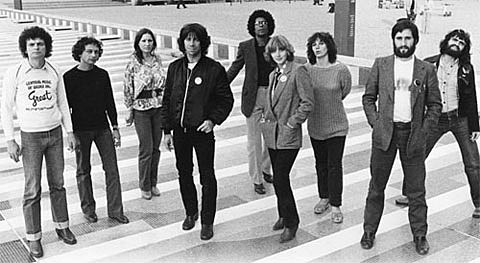 Led by classically trained drummer Christian Vander, the Paris-based Magma have been, in their way, perhaps the ultimate progressive rock group; while other artists have achieved greater commercial success and critical acclaim, Magma have typified the many ambitions and excesses of the genre that won them as many detractors as fans, even going so far as to invent their own lyrical and musical language in order to bring their unique vision to life...

As outlined on the group's eponymous 1970 double-album debut, Vander's tale -- projected to be told over the course of ten LPs -- pitted Earth against a rival planet named Kobaia. Over the course of 1971's 1,001 Centigrade and 1973's Mekanïk Destructïw Kommandoh (recorded with a choir), the story -- much of it told in native Kobaian -- unfolded to depict an Earth so uninhabitable that its citizens must flee to the nearby planet, where years of conflict culminated in the achievement of cosmic harmony and a reconciliation with the deity Ptäh. Chart success was not forthcoming, and after a few early tours of the U.S. and Britain Magma spent the middle years of the decade almost exclusively in France, where they launched records including 1974's Kohntarkosz and the next year's Live. After the commercial failure of 1976's Üdü Wüdü and 1977's Inédits, Magma essentially disbanded, although the group lived on in various forms, as alumni founded a number of loosely affiliated splinter groups to carry on Vander's work... -[allmusic]

The proggy purveyors of zeuhl, Magma, reformed in the 90s and will play Highline Ballroom in NYC on September 20th. Tickets are on sale. The NYC show is one of two US dates scheduled thus far. The other happens in Washington DC two days earlier as part of the The Sonic Circuits Festival of Experimental Music...

The Sonic Circuits Festival of Experimental Music was initiated by the American Composers Forum (ACF) in 2001 to provide DC's music and art communities with the opportunity to sample experimental and avant-garde electronic music, with an emphasis on improvisation and artistic use of new technologies.

Now celebrating its tenth year, Sonic Circuits programs music year round and presents the best in electro-acoustic compositions, free jazz, improv, noise rock, electronic drone and experimental folk, as well as live video and film programs, from DC area artists and from around the world.

The full festival schedule, which also includes Fennesz, Univers Zero, Miriodor, The Muffins, Merzbow and many others, is below.

Magma is touring on the backs of their second LP since their return to the stage, Ëmëhntëtt-Ré, out now via Seventh Records. Stream three songs at the Seventh Records site. All tour dates and some video below...