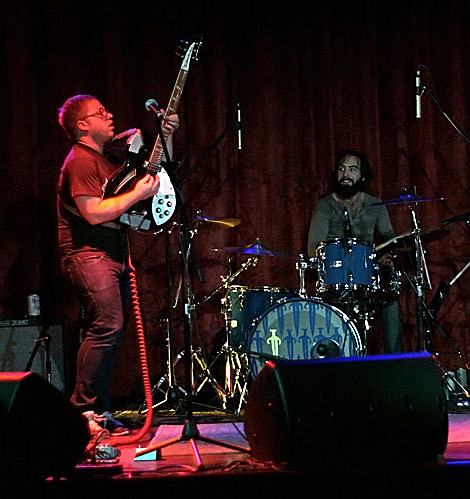 The new band from Ryan Allen of Thunderbirds are Now!, Friendly Foes - not to be confused with Friendly Fires, is currently on tour and visits NYC this Saturday night (4/11) for a show at Pianos.

"I have multiple personalities in songwriting," said Friendly Foes singer/guitarist Ryan Allen, referencing the more-fun-n-simple-style-sun bursts of the songs that served as the genesis for the trio - while comparing it to the splintery-jostle-punk pop of his other band, Thunderbirds Are Now! "I just wanted to do something that played into what I actually listened to," including mid-90's rough hewn indie rock and straight-up-fun-sugar-pop bands.
[Real Detroit Weekly]

They were last here in December. Grab an MP3 above. All tour dates below.

Also playing that show Saturday at Pianos is Real Estate, who, are also playing a show on Friday (4/10, tonight) (and have plenty of other local shows scheduled over the next month). If you haven't caught them by now, well, you have lots of chances. All dates below.

The Friday Real Estate show (tonight) is a Showpaper benefit at Monster Island Basement that TK Webb & the Visions, Vaz, Necking, Sisters and Skeletons are also playing. It looks like a great lineup that was put together very last minute; one of two big Todd P shows happening this weekend - the other is Black Dice at Market Hotel.

Skeletons, who spent most of March in Europe, opened the Thee Oh Sees-headlining show at Mercury Lounge on Sunday, April 10th. The trio was sparse and on point, playing mostly the tuneful tracks of 2008's Money. An extended groove stretched out the middle of the band's set (the longest of the night) showcasing its counterpoint guitars and textured drums under the poetic, wiry vocals of frontman Matt Mehlan.