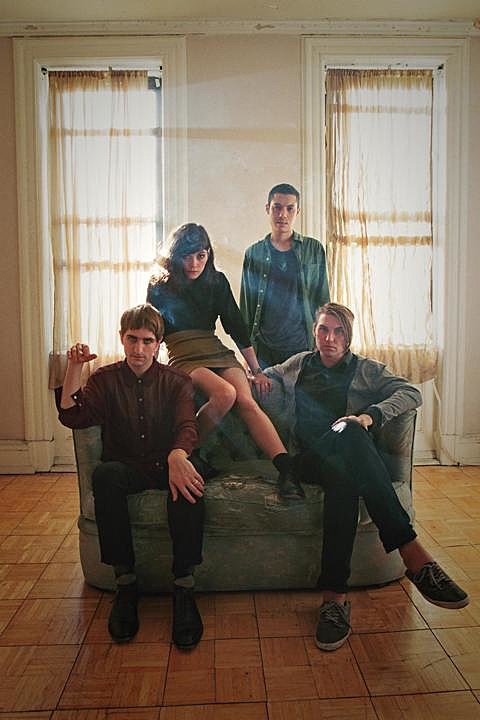 Royal Baths are opening for Moon Duo tomorrow night (10/5) at Knitting Factory and the show will be their first with a new line-up that includes Lesley Hann of Friends on bass (who seems to have left that group, along with Matthew Molnar, if their most recent 285 Kent show is any indication). Tickets are still available.

If you can't make it tomorrow night, Royal Baths have a bunch of other shows coming up, including Sunday (10/7) at Bowery Electric (whose booking seems to be getting more interesting now that Sam Mickens has been handling some of the shows there) with Larkin Grimm, Behavior & M. Lamar; Wednesday (10/10) at Glasslands with Grooms, Dum Dum Girls offshoot SISU and Punks on Mars (tickets); October 16 at 285 Kent with Forma and the Golden Awesome; and a CMJ show at Cheap Storage on October 19 with King Tuff, Habibi, Turnip King and Total Slacker (tickets). Royal Baths tour dates are listed below.

Meanwhile, Royal Baths' Jeremy Cox features on Blasted Canyons' version of "Venus in Furs" that will be on the upcoming Castle Face Velvet Underground tribute album we told you about. That album is out November 6. Royal Baths most recent album, Better Luck Next Life, came out back in February.

Speaking of Total Slacker, the band have had a sad week with the death of their drummer Terence Connor in a hit-and-run. The band will pay tribute to him this Saturday (10/6) at Cheap Storage with a dance party featuring DJ sets from Weird Rivers, Cool Serbia, DOM, and Prince Rama. Suggested donation is $5 and all procedes go to Connor's family. More info here.