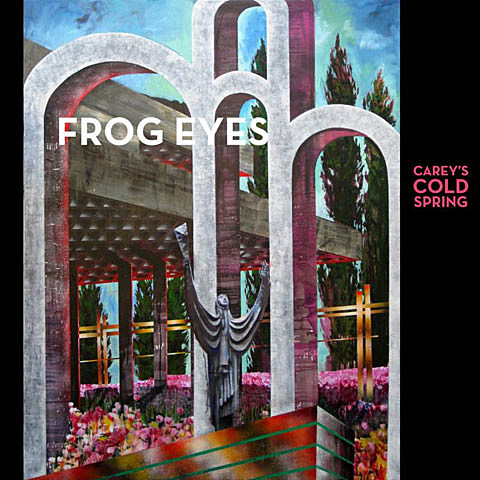 Initially self-released in 2013, Paperbag Records will re-release Frog Eyes' "Carey's Cold Spring" record on on vinyl and CD on June 17...

The label will also be releasing Carey's book called Clouds of Evil, a collection of essays compiled for his son Ivan. Essay titles include: "A Story about the Time I Broke Up Wolf Parade, a Popular Independent Rock Band, by Starring in Their music Video and accepting One Thousand of Their Dollars" and "A Few recollections of the Time my Band Frog Eyes Went to Moscow."

Pre-order the book and album in various combinations at Paper Bag Records' site.

We hope Carey is doing well after 2013's scary news. In 2006, Carey formed a project called Swan Lake with Dan Bejar (aka Destroyer) and Wolf Parade's Spencer Krug. We're still waiting for them to tour. Wolf Parade are meanwhile still on hiatus.

The Frog Eyes album's tracklist and a song to listen to, below...

Track List:
1. The Road is Long
2. The Country Child
3. Your Holiday Treat
4. Don't Give Up Your Dreams
5. Needle in the Sun
6. Noni's Got a Taste For the Bright Red Air Jordans
7. A Duration of Starts and Lines That Form Code
8. Seven Daughters
9. Claxxon's Lament
=