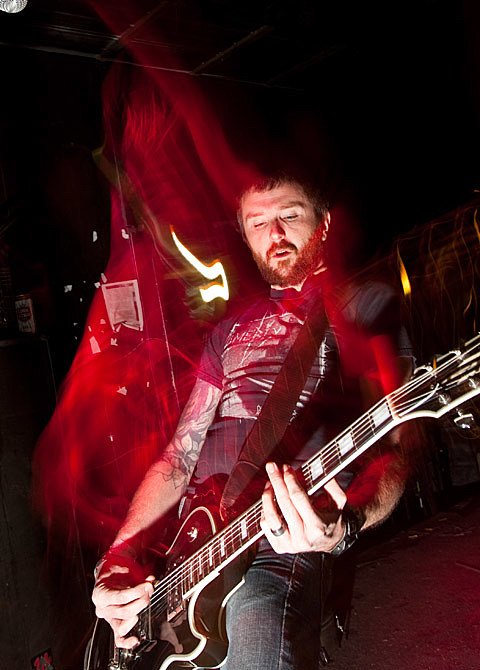 Their return engagements on the road were just a taste, and now From Ashes Rise have emerged with studio recordings via a new 7" out now on Southern Lord (get it here). The single features recent live staple "Rejoice the End," which has also spawned a new video courtesy of director David Hall of Handshake Inc and Scion A/V. We're premiering it, and if you look closely  you might recognize some of the background from the NYC show at Public Assembly.

Watch it below where you can also read a little about its inception via director Hall.

When Brad Boatright asked me if I'd like to make a video for 'Rejoice the End,' there was significant stokage and righteousness all up in my brain a little bit. Collaborate with the band on a video for a NEW From Ashes Rise song that was being released on Southern Lord? Hell yeah, just show me where to sign.

To be honest, after hearing the song and reading the lyrics, I was nervous because I honestly had know idea where to begin. Luckily Brad had some ideas, and the following advice: "it doesn't have to mean anything necessarily, as long as it looks cool." Well, that was music to my ears. Think of the video for Alice in Chains' "Main in a Box" and the cover of the first Sabbath album. Stark. Black and White. Grainy. Hell yeah, again. It wasn't much, but we had a rough plan.

So I went away for awhile armed with some sketches for scenes: a business man hastily shredding documents, a marlboro man speaking to a young woman, a mysterious figure wandering a rural area, children playing, suburban life, band shots, life in a city.

I shot for about four or five days. For the opening shot I strapped my tripod up with a seatbelt in the passenger seat of my car, pointed the camera out the window and hit record. That was the general philosophy for the rest of the production. I shot it all and tried to make meaning in the editing - a strict Eisensteinian approach, and I'm really happy with results - it feels like the most mature video I've ever made and working with Brad was a dream.

For me, and this has absolutely nothing to do with the intended meaning of the song, "Rejoice the End" is a note writ large from the trumpet of the angel gabriel. It is a song about courage. And a song about blood, and stars and never, ever giving up. I wanted to create a mood that emulates a prep rally at some uber keen American high-school: a chorus of screaming and frenzied epithets, screamed by the young at an ever approaching death.