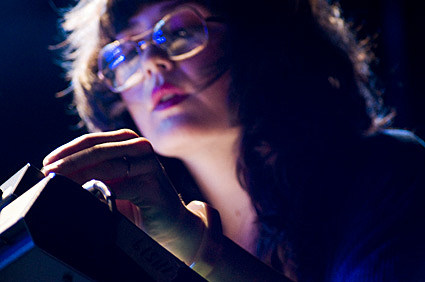 I caught an amazing set from m83 at the Music Hall of Williamsburg Tuesday night (who also played Bowery last night). Anthony Gonzalez creates interesting, thoughtful, atmospheric music whose heavier rock elements are greatly emphasized during live performance. His ability to do this while still allowing all the beautiful subtleties of the music to shine through makes for an excellent live experience. Despite being one of my favorite bands, M83 fell off of my increasingly electro-oriented listening radar. I'd only heard a handful of tracks from Digital Shades Vol. 1 and Saturdays = Youth. I was afraid I was going to get to the show and have no idea what was going on. After M83 opened with a track I hadn't heard before (but that definitely had the M83 sound I know and love), they quelled my worries by going straight into "Run Into Flowers" from their 2003 release Dead Cities, Red Seas & Lost Ghosts. Thankfully this wasn't the only flashback. The entire set alternated new, catchier, lyrics-based songs from Saturdays = Youth such as "Graveyard Girl" and "Kim & Jessie" with great older tracks like "Don't Save Us From the Flames".

Thursday night (June 5) things get dancey, but more on the rock side with a bunch of bands including Radio 4, The Cloud Room, Cassettes Won't Listen, and Foreign Islands kicking off the night at 8. From 12-4 Steve Aoki, DJ Cat and others are on deejay duty... 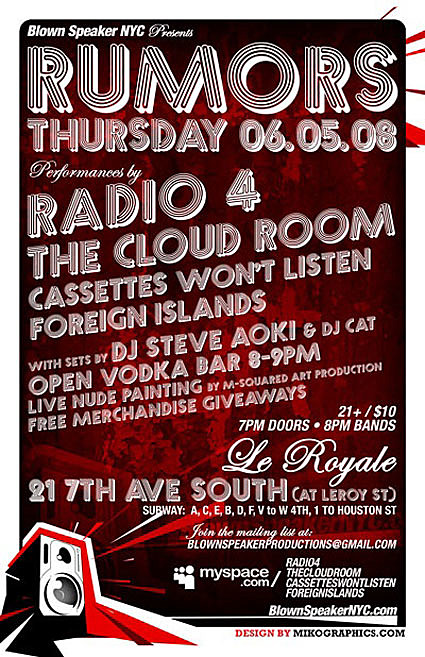 Hopefully you were able to buy tickets to one of the two sold-out Presets shows (last night at the Music Hall of Williamsburg and tonight at Bowery). I've never been able to really get into the Presets, but am curious about these 2 shows because Martin Phillips (the man responsible for Daft Punk's lighting) helped out with some of the stops on the tour, and New York is supposed to be "...in for an extra sensory treat!!!" - the Presets' Myspace Blog. 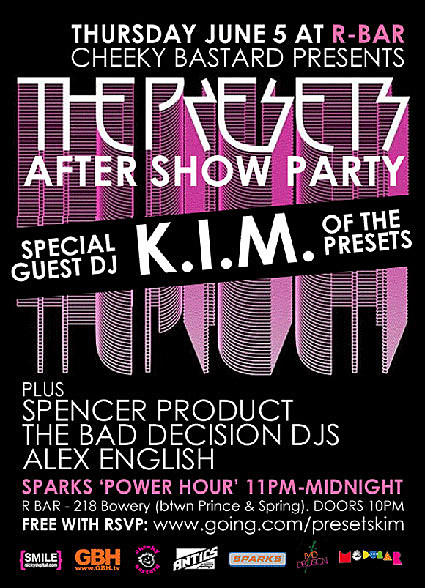