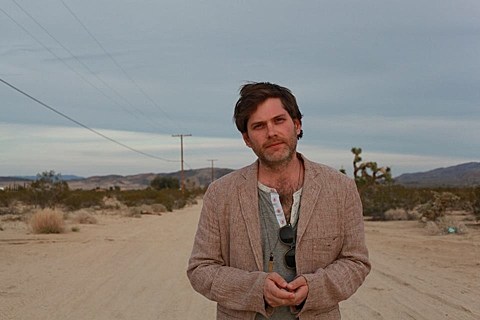 Though Fruit Bats are no more, main member Eric D. Johnson is now pursuing a solo career, which should hopefully fill that Fruit Bats void in our lives. He's releasing his self-titled debut album as EDJ on August 5 via Easy Sound. Here's a bit of what Eric said about the album's collaborators:

I had a bunch of my favorite people come and join me on this. Sam Cohen, Brian Kantor, and Josh Kaufman (all of Yellowbirds and a million other bands) made up the backbone of the band in the early part of the tracking. And then there were appearances by people from all the different chapters of my musical life - Andy Cabic from Vetiver and Tim Rutili from Califone dropped by to add stuff. James Mercer from The Shins sang some gorgeous high harmonies, and Nathan Larson of Shudder to Think (also my sometime film score collaborator) laid down some drone-y guitar vibes. And of course Thom Monahan, my usual studio co-conspirator, was there to make everything come together.

Stream two tracks from the album, along with a teaser video, below. You can also check out a recent Aquarium Drunkard session EDJ did where he covered Joe Jackson and Richard & Linda Thompson here.

EDJ is going on a tour with Delta Spirit soon, and though he's not opening their NYC shows, he'll play his own show here right after the tour ends on September 25 at Mercury Lounge. Tickets for that show go on sale Friday (7/25) at noon.

All dates are listed, with the streams and video, below...