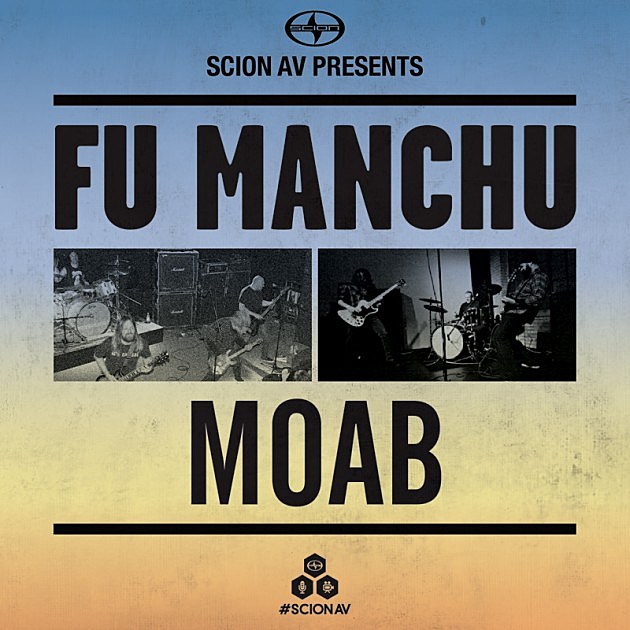 Scion A/V's inexplicable largesse towards the metal community continues ever onwards. Back in August, Scion announced that they would start holding free rock/metal shows in LA every month. Now they've upped the ante by distributing free 7" splits to the attendees of said shows. I, for one, would like to know how many 7"s they have to give away per each sale of a Scion car to a metalhead.

We're streaming both sides of the first of these splits, featuring long-running stoner rock legends Fu Manchu and bluesy doom troupe Moab, over at Invisible Oranges. From Dan Lawrence's writeup:

Fu Manchu's "Robotic Invasion" digs in with an insistent swagger. These long-running Californian good-time peddlers know their way around a riff or two, so it's no surprise that this hard-edged fuzzbomb sinks its teeth directly into your brain's pleasure center. What really sells the song to these ears, though, is a chorus that feels more old-time Clutch than cactus. Before you know it, though, the lads fire off a guitar solo that burns lasers through your eyes, so good luck plotting a homeward course on any earthbound map.

Sadly, my chief recollection of Moab's debut full-length Ab Ovo involves thinking, "Damn, that singer sure sounds a heck of a lot like Ozzy." Their side of the split, "No Soul," doesn't do much to alter that initial impression. But unlike Black Sabbath, Moab's stonier brew of the doomed draught features riffs that turn back in on themselves instead of propelling relentlessly forward. But then, late in the song, a funny thing happens: Moab hooks me. The tension between the steadfastly thrupping bass and the increasingly weeping lead guitar flourishes becomes even more palpable, and highlights (without mirroring) the interwoven threads of the vocal harmonies. All of this turns a three-minute genre exercise into a rather special little exploration of the porousness of musical borders.

Stream both songs below.