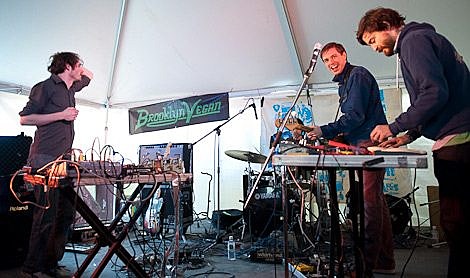 Holy Fuck played a show at the Cake Shop on April 23rd. A video from that gig is below. They tour Europe this May, then return for a North American tour that now kicks off with a Friday, May 28th NYC show at (Le) Poisson Rouge with tourmates Nice Nice, who are on Warp Records. Tickets are on sale. A track from Holy Fuck's new LP, Latin, is above.

Speaking of Fuck and LPR, we've already covered Fuck Buttons' upcoming May 21st Music Hall of Williamsburg show (that's a part of their tour) - tickets are still on sale for that. Fuck Buttons also play the night after (5/22) at (Le) Poisson Rouge (tickets on sale for tha ttoo). They have dates in Europe afterward, and will be at ATP NY in September.

All tour dates for both and a video are below...