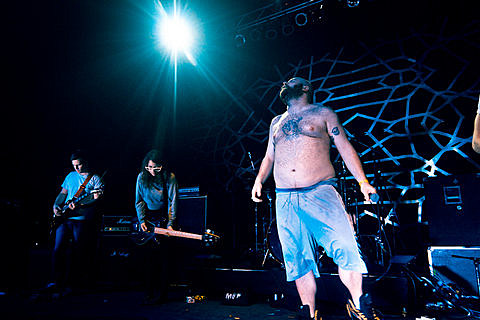 Fucked Up just finished playing Warsaw, a one-off show here in NYC. Well, turns out it was a two-off, as the Toronto band are the secret headliner's at Saturday night's (12/22) grand finale of Brooklyn Night Bazaar in Williamsburg. You may remember Fucked Up played Brooklyn Night Bazaar last year, headlining the night BrooklynVegan curated. Saturday's show is all ages, totally free, and open to the public. Other bands on the Gothamist-presented bill are Tiny Victories, Dan Friel, Dead Stars, and Screamin' Rebel Angels. This weekend's pop-up restaurant on the mezzanine is by Bushwick locavore pizza folk Roberta's.

The Bazaar has been operating at one-in, one-out capacity for most of their weekends and though lines have moved at a steady gate, FU is definitely the biggest band to play there this year, so get there early. Doors are at 6 PM, bands start around 6:30. Again, it's FREE.