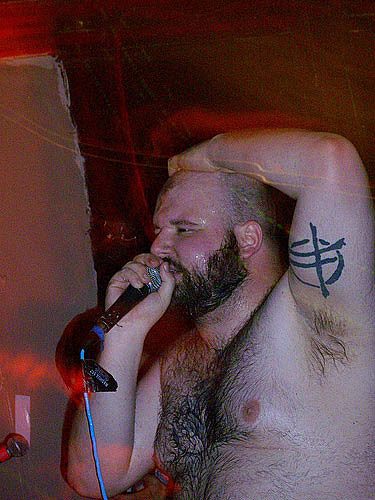 Excited about a Fucked Up/Vivian Girls reunion after their October Market Hotel romp, I showed up at the venue just as Vivian Girls were starting...and just in time to find the show filled to capacity. Making the best of the night, I headed to Goodbye Blue Monday for a couple beers while a banjo-playing Texan and a keys-bass-and-drums trio ("sound like the Dresden Dolls") serenaded.

After two half-quarts of Ballantine, I decided to try my luck again, this time finding the doors reopened and Pissed Jeans finishing up their set to a still very full room.

Fucked Up opened with their quintessential opener - the searing "Son the Father." Early on guitarist Gulag a.k.a. Josh Zucker could be heard tossing off some Ginn-esque noodling into the guitar-rich mix. Pink Eyes a.k.a. Damian Abraham reminisced somewhat fondly of an incident the night before in Boston involving himself and an overhead pipe that ended up costing the band their guarantee for the night.

The set was equal parts old and new albums - from the sing-along chorus of "Invisible Leader" to the ultra-ridiculous verses of "Black Albino Bones" that ended up only half sung as Pink Eyes caught his breath and let the crowd take over.

Speaking of the crowd: a seemingly inexhaustible supply of audience members climbed, as if from a clown car, toward the stage for a never ending cycle of stage dives, many of which played out like a game of King of the Hill on Abraham's shoulders and Half Dome-shaped forehead. As is customary, cameras illuminated the stage with blinding bursts of blue and yellow light throughout, casting Abraham's shaved head in eerie relief to the shadowy backdrop of duct tape and mattresses. At shows like this it's always interesting to see how the photographers and the fans get along, one onstage shielding their thousand dollar cameras and the other throwing themselves onto each other and the floor of the venue, all within inches of the band.

During "Crusades," power to the bass and other instruments cut out - which led to a few a capella numbers in between to kill time (one or two of the covers that kept getting shouted out?). When the band came back, the set closed out strong around 1am - to a crowd that seemed mostly ready to get out and wake up for their first Obama A.D. commute.

Speaking of photographers at this show, ours hasn't had a chance to work on them yet, but don't worry, they're coming. And there's one above, courtesy of thepiratehat.