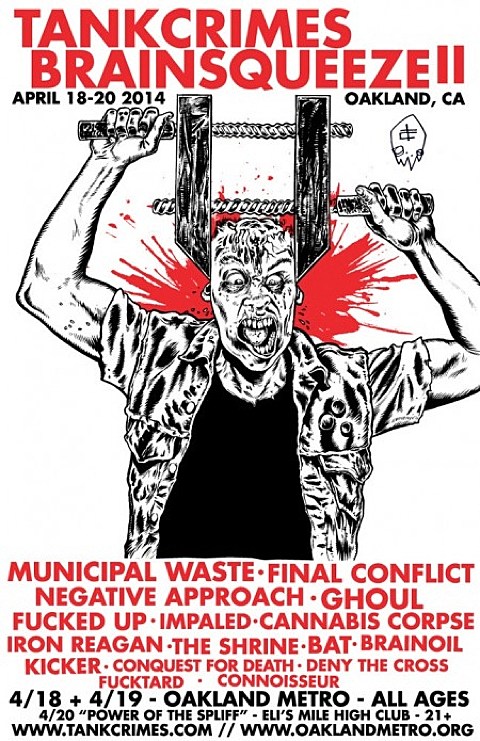 Back in January, we mentioned Brainsqueeze II, the Californian punk/metal festival organized by Tankcrimes and featuring a number of acts that have worked with the label. A few acts -- namely Connoisseur & Impaled -- have been added to the bill since, and the daily schedule & venue info have both been announced. You can check those out below.

We've got a bonus on tap, too. Tankcrimes have put together a free downloadable (or streamable, if that's your thing) compilation that we just posted over at Invisible Oranges. Unlike most recent comps, it's a reasonable length -- sixteen short songs. I consider most of these songs worth listening to in their own right, but some of them are rarer finds -- an exclusive re-recording of a sardonic Muncipal Waste song called "Insurance Fraud" from their split with Crucial Unit. It also features songs from upcoming short-format releases by Fucked Up and The Shrine. There's also a bonus cut by Obsessor, who don't appear on the fest's lineup, and a secret bonus cut that you'll have to download the comp to hear.

The Fucked Up song is a Cardboard Brains cover from the B-side of the recently-announced sixth entry in their Zodiac series. Titled Year of the Dragon, the recording features a 17-minute A-side original, the Cardboard Brains cover, and a The Ugly cover. If you're heading to SXSW, you'll be able to catch Fucked Up at Pitchfork and Stereogum's day parties, both of which fall on Thursday (3/13).

You can stream the comp below (aside from that secret cut) or download it for free. Tickets for the festival are on sale here. The comp track listing, the Brainsqueeze day-by-day lineup, and a goofy commercial for the fest are available below as well...