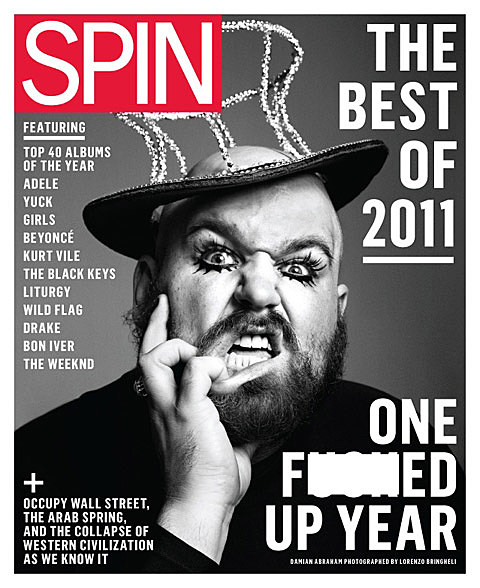 One could argue (and we did, in our story on the band in the January-February issue!) that Fucked Up's rock opera David Comes to Life was uniquely resonant upon its June release because of the emotional synchronicity between an album that spilled forth with such an appropriately chaotic narrative and a year in which tumultuous disarray became the norm. But good lord, David Comes to Life could've been sung in backwards Tagalog and it still would've made perfect sense in 2011. That's the power of a gang of punks playing with Olympian levels of passion and purpose. [SPIN]

As you hopefully know, Fucked Up will be performing this Friday (12/16) at the BV-curated night of this weekend's Brooklyn Night Bazaar, a full evening of music that also includes Dom, Big Troubles, Caged Animals, Radical Dads, as well as Frankie Rose spinning tunes. Tickets are only $10 and still available.

There's a lot more Fucked Up news actually. Tonight (11/12) the band will be guests on Anthony Bourdain's No Reservations Holiday Special, which also features Christoper Walken, Norah Jones and a lot of extremely non-vegan cooking (though the Vegan Black Metal Chef is also a guest). Maybe Fucked Up will play in Bourdain's fridge, like Das Racist did on last year's Holiday Special.

Next Tuesday (12/20) in the band's hometown of Toronto, Fucked Up will perform David Comes to Life in its entirety, with proceeds going to charity. (PS I Love You, The Sadies and Quest for Fire also perform.)

Fucked Up are also releasing a split Christmas single with Sloan, with proceeds benefiting the COUNTERfit Harm Reduction Program and the Barriere Lake Legal Defense Fund. Fucked Up's side is their take on "Jingle Bells," while Sloan tackle "The 12 Days of Christmas" (which is streamable below). Only 500 are being printed -- maybe they'll be some at the merch table this Friday?

The band have also announced the release of 2012's annual Chinese New Year single, "Year of the Tiger," which is out February 21. The 15-minute track features guest vocals from Austra, Duchess Says' Annie-Claude and Jim Jarmusch, which Matador claims is "MAYBE THE BEST THING FUCKED UP HAVE EVER RECORDED" but being their record label they're prone to such proclamations. But maybe it is.

Click through for a just-released video of "Turn the Season" plus video of the band performing "The Other Shoe" on Canada's George Stroumboulopoulos Tonight show, as well as the entire rundown of SPIN mag's Top 50 Albums of 2011...

Fucked Up - Turn the Season

Fucked Up - "The Other Shoe" on George Stroumboulopoulos Tonight 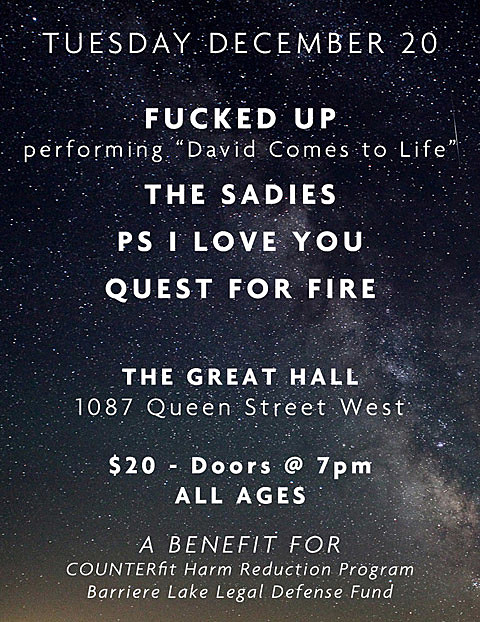