Fucked Up at Purchase Fall Fest (more by Kellyann Petry) 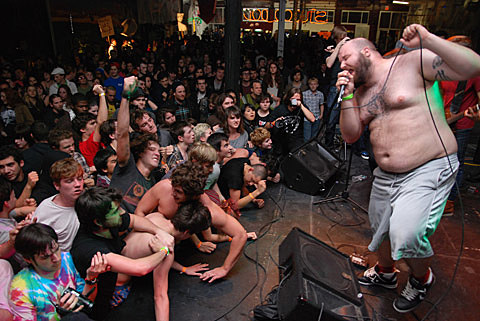 Fucked Up will play NYU's Kimmel Center on February 11th with DD/MM/YY, Double Dagger and No One and the Somebodies for the "F*cking Valentine's Day Show". "Come and join us for a celebration of a terrible holiday in the best way we know how: moshing & cupcakes. Yes, there will be cupcakes." $5 for NYU students, $7 for non-NYU, and "Tickets for NYU students will be going on sale at the Skirball Box Office (Ticket Central) or online via NYU HOME at the end of January. Tickets for non-NYU students will be available the DAY OF THE SHOW at ticket central, and please arrive at the box office before 8pm."

That brings the total number of scheduled North American dates for Fucked Up to two once you add in their appearance at Chaos in Tejas. They also have a couple of shows scheduled in Australia.

Maybe the lack of dates is due to frontman Damian Abraham's hectic schedule as new host for The Wedge on MuchMusic... The Wedge is the Canadian channel's alternative/indie show that features live performances, music video, and interviews and will be resurrected with Abraham as its mouthpiece on January 26th at 10 PM EST (sorry, for Canadians only). After catching Damian as the host of festivities up at NXNE in Toronto over the summer, I have no doubt he is the right man for the job.

All tour dates, and some videos below. 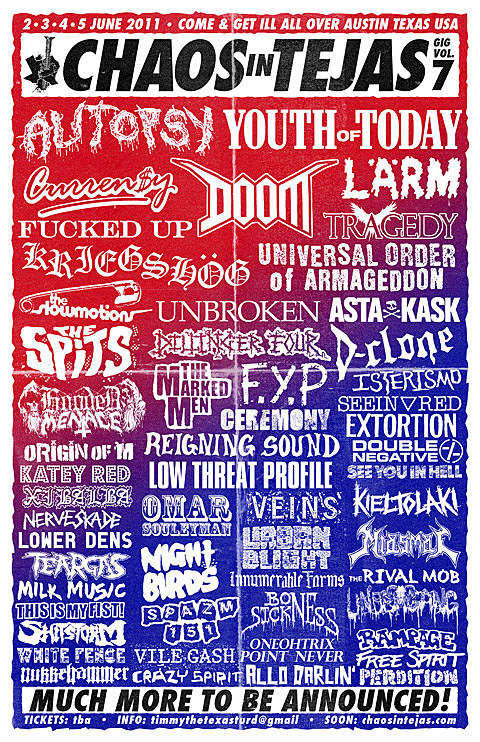 Filed Under: Damian Abraham, DDMMYYY, Double Dagger, Fucked Up, Kimmel Center, MuchMusic, No One and the Somebodies, NYU
Categories: Music News, tour dates
Comments
Leave A Comment
Back To Top