Fucked Up @ House of Vans in June (more by Maclyn Bean) 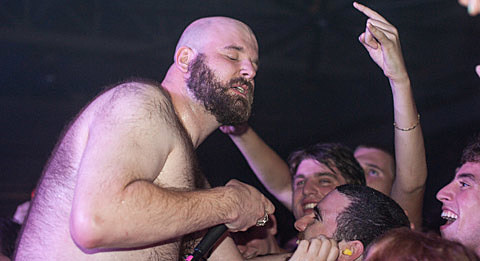 Fucked Up, who not too long ago played a very sweaty House of Vans show, will be back in NYC to play Le Poisson Rouge on September 28. Dope Body open the show and tickets are on sale. It's currently their only announced North American tour date.

UPDATE: Fucked have since announced a handful of tour dates. Those are listed below.

Dope Body, meanwhile, is touring with Scout Niblett this year, and playing NYC on 9/13 at Saint Vitus (tickets).

In other FU news, for those of you looking forward to Cassette Store Day (9/7), the band will be releasing 2006's Hidden World (which actually saw release on 8-track! at some point) for the occasion via Sexbeat. So look out for that at the cassette store nearest you.