"RT @EducatingEric: It needs to be Thursday already so I can see Fucked Up with @AndrewWK on keyboards and @Viviangirls" -AndrewWK 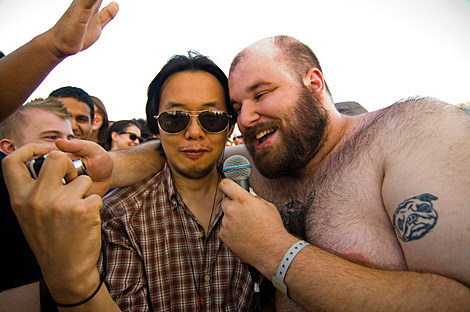 Fucked Up are playing the entirety of their 2008 record Chemistry of Common Life at Brooklyn Masonic Temple on Thursday, November 5th. The 52-minute-and-20-second work will feature additional accompaniment by guests that include Andrew W.K., Vivian Girls and opener Katie Stelmanis. Also opening the show will be Titus Andronicus (who've been busy lately) and Brooklyn's The Girls at Dawn. Tickets are still on sale.

We also have a pair of tickets to give away, along with a copy of Chemistry of Common Life on LP and a Titus Andronicus limited Live in London 12" LP. Details are below.

On January 26th, Matador will be releasing a compilation of rare Fucked Up singles and b-sides called Couple Tracks. The comprehensive breakdown of the double-CD/double-LP is posted below.

Katie Stelmanis, a fellow Torontonian who's collaborated with Fucked Up before, just opened for Tegan and Sara at both of their Town Hall shows (Oct. 30th & 31st). At the gigs, she filled out the one-woman-show with a drummer and guitarist backing her up. A clip of her playing "Believe Me" at the first Town Hall show is below.

After the Brooklyn show, Fucked Up will be playing Fun Fun Fun Fest in Austin on November 7th.

Contest details, show flyer and Couple Tracks info and tracklist are all below... 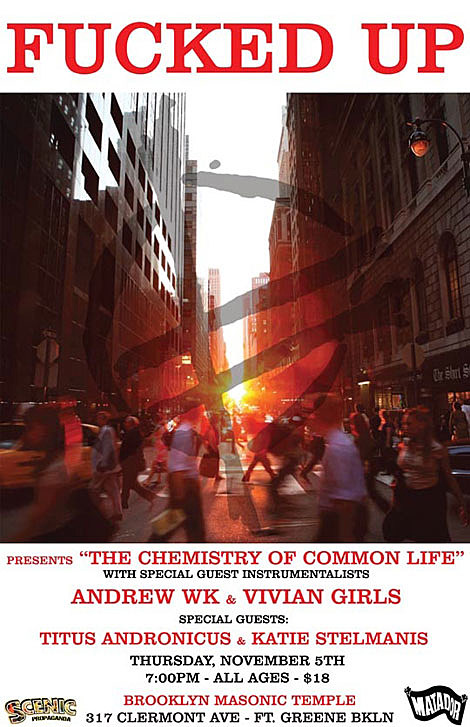 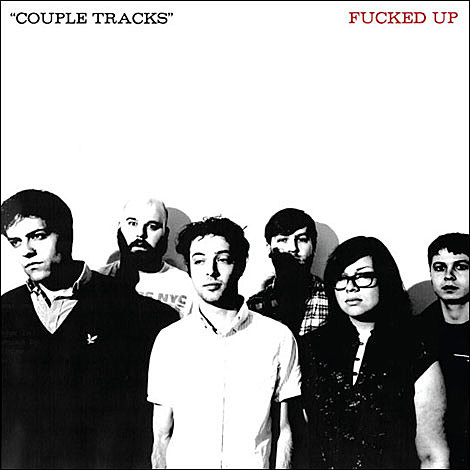 On January 26 [Matador] will be releasing a double-CD and double-LP compilation of Fucked Up's many, many hard-to-find uncollected 7" and 12" tracks. Entitled Couple Tracks, it contains 25 songs. (There are rumors that there may be a simultaneous 7" single of the same name). Designed as a sequel to their earlier compilation, Epics In Minutes (Deranged, 2004), the cover photographs riff on the Beatles red and blue albums thang. Comes with complete illustrated discography of the contents, with extensive liner notes about each song.

Couple Tracks spans an extraordinarily varied (and extraordinarily collectible) musical career that has mainly been documented on 7-inch vinyl singles released around the world on many labels in many countries. Chronologically, it ranges from the A-side of their first single, No Pasarán, a commentary on the Spanish Civil War released on Deranged in 2002, to the fast alternate take of No Epiphany, their latest 7" on Matador from earlier this year.

Other notable tracks include:
* the definitive version of Generation and its two B-sides, Ban Violins and Magic Kingdom, released on Slasher - the introduction to the A-side comes from a Hamas recruitment CDR
* covers of songs by British twee -pop legends The Shop Assistants, Another Sunny Day and Dolly Mixture, from two 7"es self-released by the band and only given away at a single show in Toronto in 2006, plus the B-side of a Matador 7" from mid-2008
* original, heavier versions of songs that later ended up on Hidden World, such as Triumph Of Life and Neat Parts, both from the 7" originally released by Peter Bower Records in the UK
* Fixed Race, from the Spanish version of Dangerous Fumes, aka Humos Peligrosos, released in Spain on La Vida Es Un Mus in 2006
* Toronto FC, from the Hard Skin split 7", only given away at a show in London in 2007
* the 12" version of Last Man Standing, only available if you selected the correct set of interlocked grooves on the B-side of the Year Of The Dog 12" released in 2006
* 5 unreleased tracks
* Plus much more - all beautifully remastered for your listening pleasure:

TO WIN a pair of tickets for Thursday's show at BK Masonic Temple, a Chemistry of Common Life 12" 2xLP, and a Titus Andronicus limited 'Live in London' 12" LP, e-mail bvcontests@hotmail.com with the subject line "FCKD UP." Include your first and last name. The winner will be picked at random and contacted. The records will be mailed, so the winner will be contacted for an address.