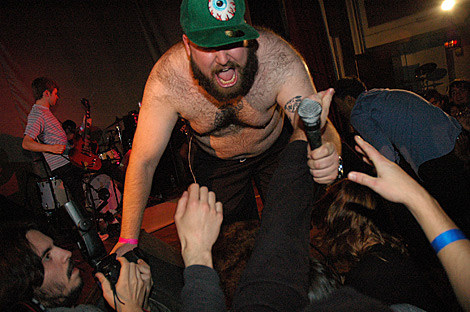 2010 is already looking like a good year.Take, for instance, Fucked Up and Kurt Vile's February tour that'll include a pair of NYC-area shows. The first will be at Maxwell's on Thursday February 18th (tickets TBA). The second happens at Europa, a mid-size club whose stage seems awesomely equipped for the gig, on Friday, February 19th. Tickets are on sale. The shows are part of a larger Kurt Vile/Fucked Up tour, the dates of which are posted below.

Fucked Up last played NYC at the much larger Masonic Temple in November. Like the new show at Europa (and the one Kurt Vile recently played at Europa), the Masonic Temple gig was presented by Scenic. Since then the band played Fun Fun Fun Fest in Austin on November 7th and headlined the M is for Montreal Fest on November 21st in their native land of Canada (more on the latter coming from Bill soon).

For upcoming releases, Fucked Up is planning a rarities collection called Couple Tracks, to come out January 26th on Matador. From that, the song "Neat Parts" (originally the B-side to the "Triumph Of Life" 7") is posted above. Preorders for the 7"/singles collection will come with a 7" for a new song called "Couple Tracks" (the b-side is another new track, "Holden"), out the same day.

Fucked Up is also in the process of recording an X-mas benefit single with guests that include TV on the Radio, Broken Social Scene, GZA, No Age, Yo La Tengo, David Cross, Bob Mould and Ezra from Vampire Weekend. In the November 1st interview with Bring Back the Boombox that broke the news, Pink Eyes also added, "I'm still waiting on confirmation from Feist, Jarvis Cocker, and M.I.A." The money from the single, financed in part with the band's Polaris Prize proceeds, will go to organizations that support Canadian Aboriginal women's rights.

In that same interview (excerpted below), Pink Eyes talks about the band's upcoming single & 7" recording plans with NOFX, King Khan and BBQ and GZA. And the band's blog adds a split with Sareena Maneesh to that list. More info is below.

Sareena Maneesh, now also part of the Beggars label family, has NYC shows coming up at Mercury Lounge and Littlefield.

A set of pictures from Kurt's Public Assembly show, with all tour dates and more info on the Fucked Up recordings are below... 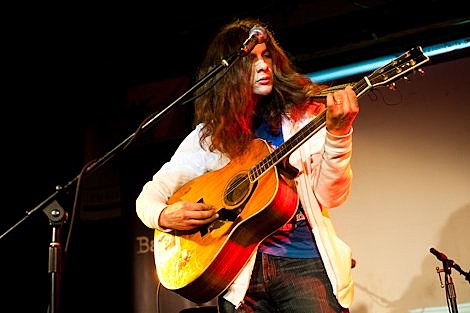 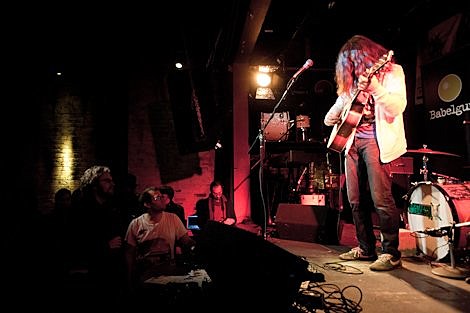 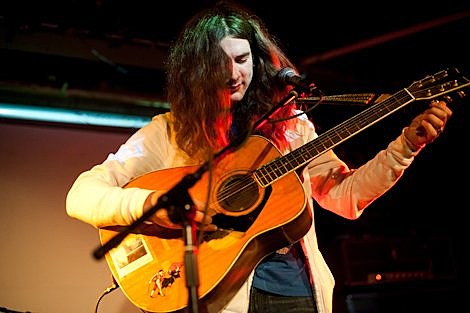 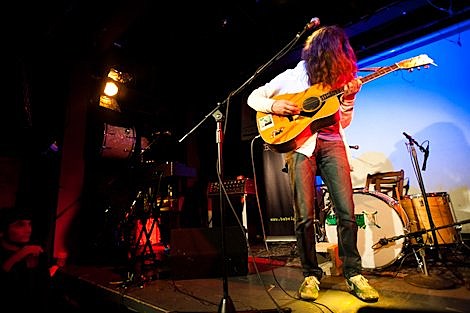 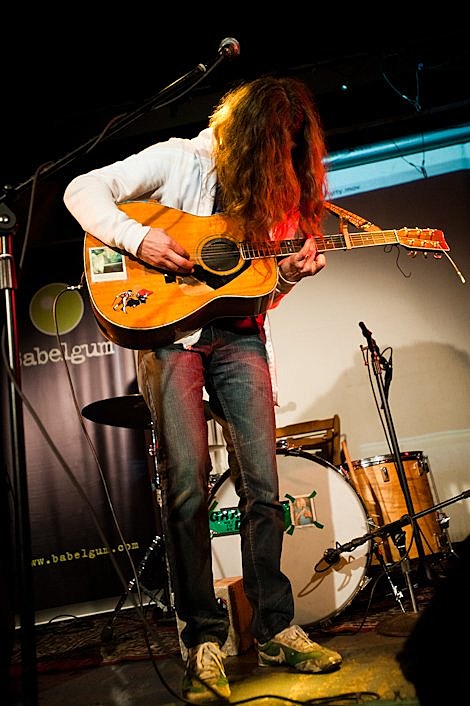 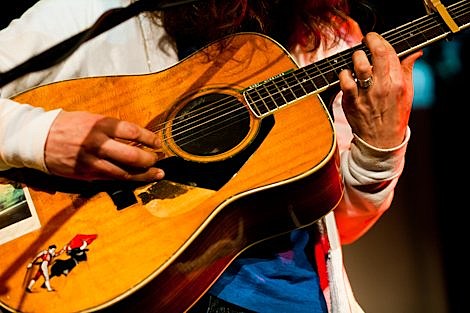 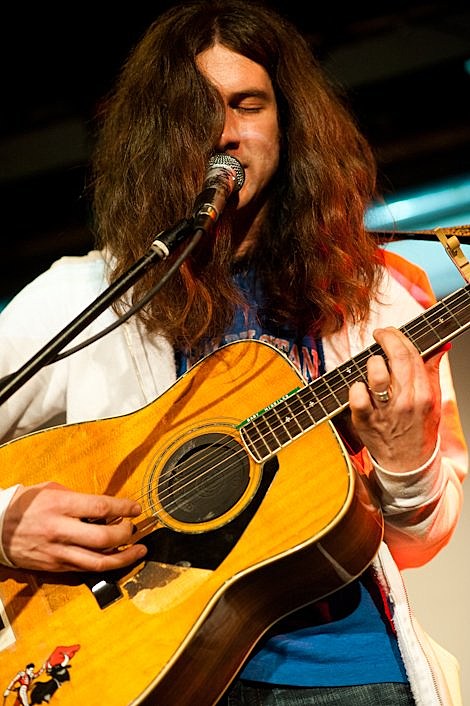 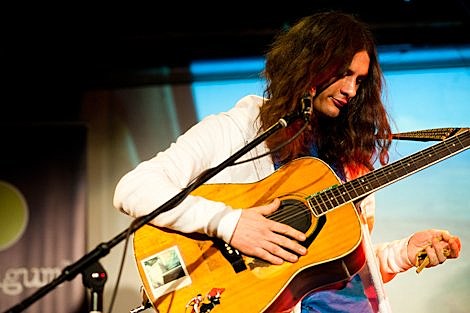 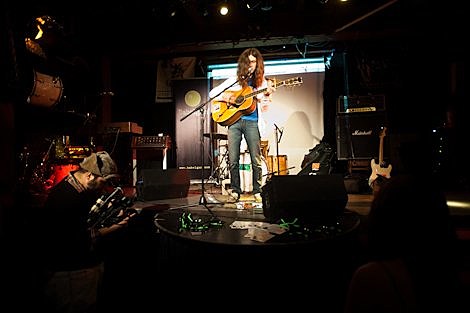 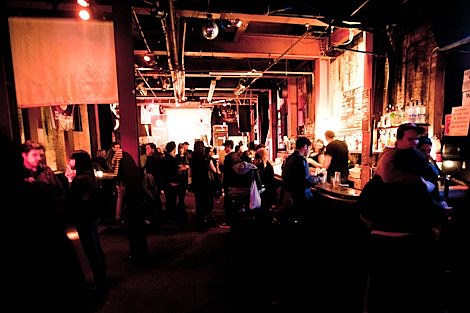 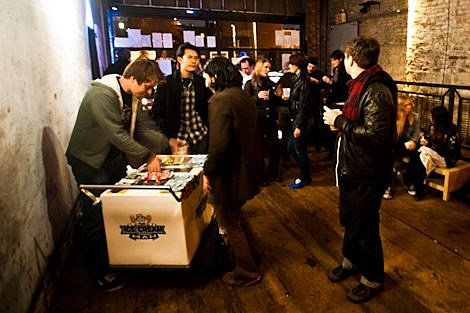 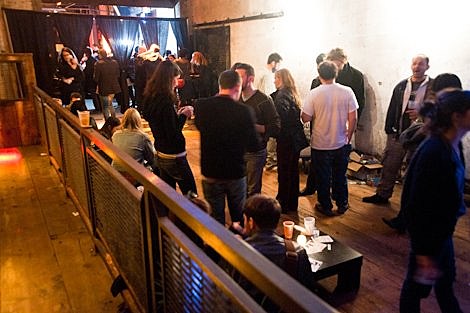 Forthcoming Fucked Up releases (from the band)

and some other surprise stuff. We are [at the studio] all day all night so really haven't had time to write any posts.

BBtBB: How many songs are on this [Christmas single]?

Damian 'Pink Eyes' Abraham: Two. We're doing a cover of 'Do They Know it's Christmas (feed the world)' and so far we've recorded David Cross, Bob Mould, Ezra from Vampire Weekend and tons more coming through. We want it to be as big as possible, we want this to be an opportunity to generate some real money for these organizations...The groups we're working with are really living hand-to-mouth and us giving them a few thousand dollars will help them survive for another year...

BBtBB: How are things looking tour wise? Anything coming up?

DA: We're doing Europe, two more shows in America [note: at Brooklyn Masonic Temple and Fun Fun Fun Fest, both of whihc just happened] and that's about it this year. In January and February we're going back out and taking Kurt Vile on tour. I think his new record is amazing. We've toured this record [Chemistry of Common Life] so much, I'm sick of hearing the songs. I can't wait to start writing new stuff.

BBtBB: How does that work for you guys? What is your writing process?

DA: Normally Jona, Mike and Josh will sit down and write a basic song. Sandy will come in and work on her bass part, figure out what she wants to do with that and I'll come in last minute and write in lyrics. In November we're going to be recording a split with NOFX and a split with King Khan and BBQ. And a song with the GZA! [November 1st 2009]