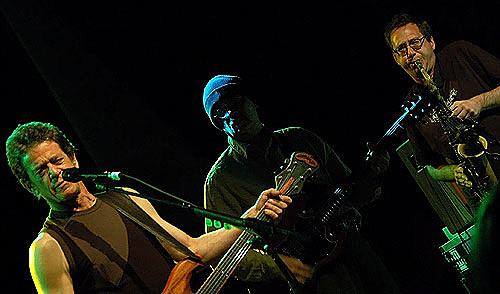 Lou Reed, John Zorn, Sonic Youth and others will play a benefit concert for Tuli Kupferberg, the Beat poet and original member of the Fugs, at St. Ann's Warehouse in Brooklyn on Jan. 22. Mr. Kupferberg, 86, has had two strokes over the last year, which have left him blind -- although he still manages to regularly post video jokes to YouTube -- and the tickets for the concert, which is being produced by Hal Willner, will help pay his medical expenses. Among the others performers are the singer John Kruth; Ed Sanders, Mr. Kupferberg's fellow Fug; and Peter Stampfel of the Holy Modal Rounders (who also played on early Fugs albums). Tickets are $75 to $125 and are available at stannswarehouse.org or (718) 254.8779. [NY Times]

Hal Willner, who's putting together the show, also organized the "I Gotta Right to Sing the Blues?" night at the Lincoln Center's American Songbook Festival, which is coming up on Wednesday, January 27th (featuring Rufus Wainwright, Bill Frisell, Van Dyke Parks and others).

In December, Lou Reed took part in the NYPL talk with fellow VU members Maureen Tucker and Doug Yule. A recording of that night is posted above. Coming up, Reed's "Metal Machine Music" is going to be performed by Fireworks Ensemble at Columbia's Miller Theatre on Friday, February 5th. Tickets are still on sale.

Tuli was one of the Fugs who played a benefit show at the Bell House in April.

Some of the above mentioned Tuli videos are posted below...

Tuli Kupferberg Was it really Possible?

Tuli Kupferberg Every Little Meaning has a Movement

Lanny Kenfield I Bombed Them My Way