Austin, get ready for some of this (more by Samantha Marble) 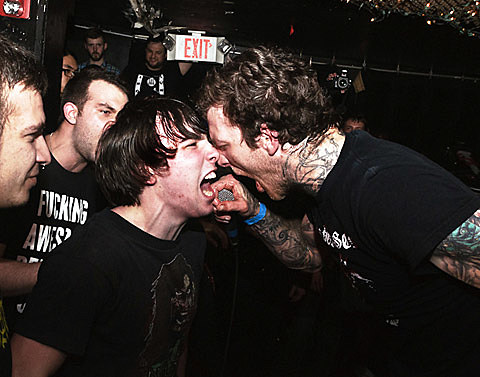 Full Metal Texas is entering its third year as one of the biggest metal events at SXSW. I had a great time catching faves like Kylesa & Skeletonwitch at Emo's Annex in 2009, and in 2010 they featured names like Dillinger Escape Plan, Howl, (the calling-it-quits?) Iron Age, Darkest Hour and others.

Now it is with great pleasure that I announce my involvement in Full Metal Texas 2011 alongside Yeah! Management, Branch Marketing Collective and 1000Knives! Much like last year, the free event will take place during the day on Thursday (3/17 from 12 - 6PM) in Austin across two stages at Emo's. But here's where it differs.... featuring 15 bands in total, roughly half of the bands will appear on the "BrooklynVegan Stage" which will include performances from:

Trap Them
Rwake
Hull
All Pigs Must Die
And more to be announced.

The second, or rather, Main Stage will feature some VERY big names in addition to the following:

The show will be brought to you by the fine folks at Bands On A Budget, Dead Conflict Records, Evil Bong 3D, Harpoon Brewery, Sin Cal Industries, and Wacken Open Air. In addition, March Is Metal Month, Metal Injection, Metal Insider, MetalSucks, Record Store Day and Put In Mouth are all also on board as show sponsors.

Some more details on the show are below and the full lineup is forthcoming! Also note that this one is one of FOUR BV-BBG related metal shows slated to happen in Austin during SXSW this year... so make sure and look out for more announcements soon

FULL METAL TEXAS IS BACK!
March 17th, 2011 at Emo's Inside and Outside stages

After two wildly successful years, FULL METAL TEXAS is back for a third year of bringing the heavier side of things to Austin during the music festival. This year, Yeah! Management and Branch Marketing Collective have teamed up with Brooklyn Vegan and 1000Knives to bring an even more diverse lineup. The show takes place at Emo's Inside and Outside stages on Thursday, March 17th from Noon til 6pm. 15 bands will tear apart the two stages and the first batch of confirmed acts has been announced:

Plus this year, one lucky unsigned band will get to perform through a contest with signmeto.roadrunnerrecords.com! Details to be announced soon.

As in the past, Full Metal Texas has some amazing partners on board for this year from around the world including:
Bands On A Budget - We Make Merchandising Simple & Affordable (www.bandsonabudget.com)
Dead Conflict Records - Home to best rock releases
Evil Bong 3D - From the creators of Puppetmaster, Evil Bong 3D, opens in theaters across the U.S. on 4/20! (www.evilbong3d.com)
Harpoon Brewery - (www.harpoonbrewery.com)
Sin Cal Industries - Body Jewelry, Piercing, Skate Shop, Decals, Clothing & Accessories (www.everybodysins.com)
Wacken Open Air / ICS Festival Service - The world's largest metal festival taking place Aug 4-6 in Germany (http://www.wacken.com/)

The event is also getting marketing support from March Is Metal Month, Metal Injection, Metal Insider, MetalSucks, Record Store Day and Put In Mouth. Stay tuned for even more band announcements in the coming weeks and get ready to tear apart Austin on March 17th!