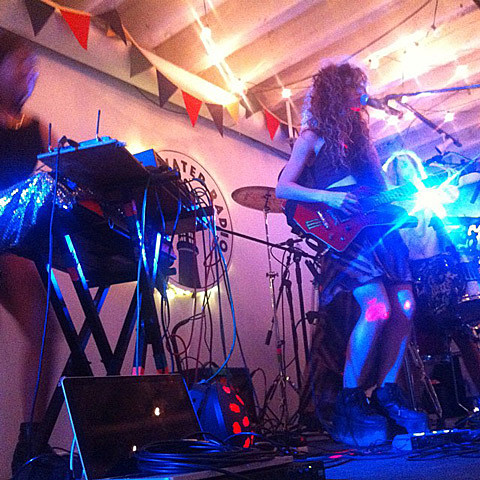 South Street Seaport's Fulton Stall Market began a few years ago as a more typical farmers market, with a few stands set up along South St at Fulton. (It was the location of my Sunday Sound Bites series, you may or may not remember.) Hurricane Sandy messed everything up for FSM (and most stuff at the Seaport) for a while, but it is now back in a permanent indoor location at 207 Front St. In addition to NY-area produce and products, it also has the Market Bar (beer/wine), a little record shop via the Record Grouch folks, and Little Water Radio, an internet station that broadcasts live noon - 6 PM Eastern every day.

Little Water Radio launched a couple months ago, started in part by Stephen Dima who was a DJ at East Village Radio for years and programs River Rocks, 4Knots, Seaport Music Fest, Modern Sky Festival and more. Little Water Radio includes shows from labels Northern Spy and Paper Garden and, full disclosure, I've got one on there as well ("Past Future Perfect," Saturdays 2 - 4 PM). The LWR side of Fulton Stall Market also has a stage -- it's where Prince Rama played at the Festival of Independence on the Fourth of July this year -- and they're going to have free live shows every Friday evening. This Friday (7/31) it's folk artist Josephine Foster (who plays Trans-Pecos tonight) -- UPDATE: Josephine had to cancel her FSM appearance, Parlor Walls playing instead. August's schedule currently looks like this:

Speaking of Prince Rama, they are hosting a special evening called "SPAGHETTABOUTIT" at Fulton Stall Market on August 9. It's a Guns N' Roses themed meal and we'll just let them explain:

Prince Rama's Nimai, in conjunction with her sister Taraka, Paper Garden Records and the Fulton Stall Market all come together with a fun and delicious singular purpose -- to unify food and music. Nimai will be cooking the food of course, while Taraka takes over DJ'ing duties. The theme of this particular Sunday dinner will draw inspiration from Guns N' Roses. We will celebrate "Spaghetti Incident" by DJing all of Guns N' Roses greatest hits and cooking all of the greatest food to go along with it! All local produce, generously supplied by Local Roots CSA. Will also include some Ennio Morricone bits and pieces.

Knowing Prince Rama, this will probably be fun. Tickets for "SPAGHETTABOUTIT" go on sale Thursday (7/30) at noon.