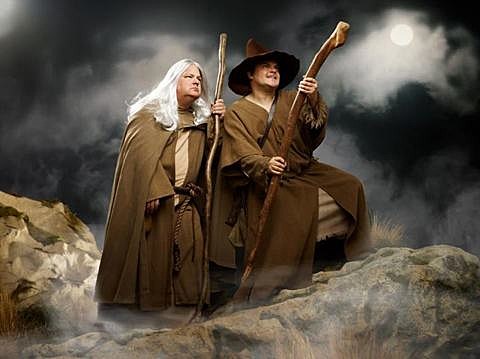 Holy smokes dudes. Lookit, I don't really go for the whole 'festival' scene, nor do I have the scratch or the resources to get my ass on a plane to go to some far off place and put myself up in a hotel in order to endure a few days of music and drunk idiots and awful tattoos and dudes in short-shorts prancing around like the world around them isn't basically in the worst shape it has ever been and stuff. And I am too old to do the old bro-out road trip, share a hotel room with eight dudes nonsense. However, two upcoming events in Elsewhere, USA are forcing me to consider eBaying everything I own in order to personally witness their majesty. The first event, which I've already mentioned, is Festival Supreme which is taking place on the Santa Monica Pier on Saturday October 19. Top to bottom, this show boasts the best line-up of entertainment I have ever seen including performances by Tenacious D, Zach Galifianakis, The Mr. Show Experience, Reggie Watts, Tig Notaro, Eric Idle, Tim & Eric, Sarah Silverman, and scores more of top shelf greatness. If ever there was a show worth the price of admission, a plane ticket, and a hotel room somewhere this is it.

Less than a month after that, the incredibly curated Fun Fun Fun Fest 2013 has to go ahead and add a comedy line-up to their already powerhouse festival. If you're at the fest, which happens in Austin Texas from November 8 - 10, prepare yourself, for their comedy line-up includes the impossibly great Tenacious D, Patton Oswalt, Craig Robinson, Doug Benson, Rob Delaney, The Eric Andre Show Live(!), Kyle Kinane, Jonah Ray, and tons tons tons more. The fact that, in a single festival, I can see Slayer, Quicksand, The Descendents, Judge, Subhumans, and the Cro-Mags as well as all this great comedy is basically my most wonderfully imaginative dream come true. Tickets are currently on sale and I urge you to get on it tout de suite, sunshine.

But hey, if you're a New Yorker like me and dreams of travel to exotic US locations for comedy/music festivals are just that, a dream, have no fear. For as we mentioned yesterday The Eugene Mirman Comedy Festival will return for it's 6th year with shows at The Bell House and Union Hall from September 26 - 29 that are sure to be so good you're gonna want to have a clean pair of underwear handy. This year's festival is bursting at the seams with comedy, maybe some music, and definitely more. Klaus favorites including Kristen Schaal, Jim Gaffigan, Ira Glass, Wyatt Cenac, Jon Benjamin, Neil deGrasse Tyson, Michael Che, Kurt Braunohler, and Leo Allen are all scheduled to perform in one way or another. In addition to that, the ALWAYS SOLD OUT StarTalk Live! with Neil deGrasse Tyson and Eugene Mirman will be back this year, as well as tons of smaller shows featuring newer talent and comedians who are sure to be sucked into the vacuum that is Los Angeles sooner or later. And you know your man Klaus is stoked for the return of Invite Them Up, Hot Tub with Kurt and Kristen, and that super dope Bob's Burgers Season 4 Celebration. It's going to be a great festival loaded with the shows and comedians that made me fall in love with the NYC comedy scene in the first place.

For some of you today is probably payday so get those sweet bunz of yours onto TicketFly and start buying those tickets!