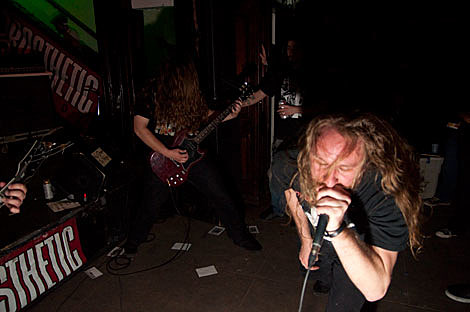 With their new LP Vultures At Dawn due on June 8th via Prosthetic Records, blackened death-dealers The Funeral Pyre will hit the road with the crushing hardcore combo Early Graves for a string of dates that will include a BV/1000 Knives show at Union Pool on 7/17 with upstart black-metal killers Mutilation Rites.

Meanwhile, Mutilation Rites has a few other dates on their calendar including June 1st at Public Assembly when the band will team up with Australian BM badasses Nazxul (who are playing MDF this weekend) and New England's Witch Tomb. The show kicks off at 8PM and $15 gets you in.

June 20th will see Mutilation Rites at Europa with a killer bill of bands including At War, Midnight (who are playing the the Punk Island Festival that day), Deathrash, Crucifist (also playing Punk Island), and Mutant Supremacy. Tickets are on sale.

Both Mutilation Rites and Mutant Supremacy played Party Expo on 5/25 with Cannabis Corpse.

Early Graves are currently streaming the title track from their forthcoming LP Goner, at their myspace. Harsh, pissed off hardcore of the 1000MPH sort, Goner impresses me more with every listen. Make sure and pick the LP up when it drops on June 22nd and get out to see the band on July 17th. Seriously badass.

Vultures at Dawn is The Funeral Pyre's fourth LP since their inception in 2003. Check out a track, "Personal Exile" streaming at Metalsucks. The band recently played SXSW, tagging both the BV/1000 Knives/Crustcake Pizza Party on 3/18 as well as the Prosthetic Showcase the night before.

Dig on the show flyer, all dates and some videos below... 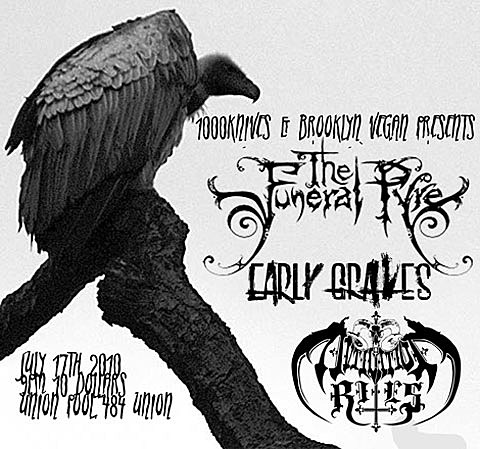