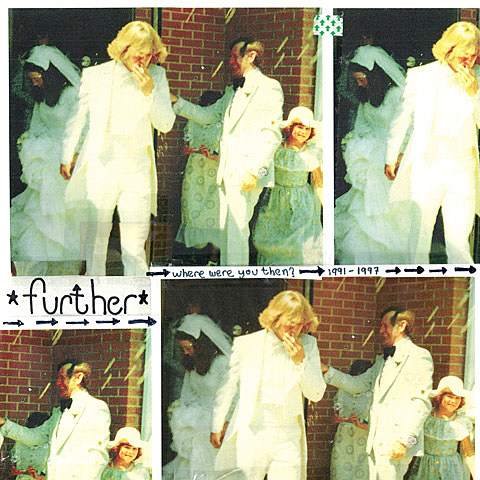 Before they formed Beachwood Sparks and The Tyde, Brent and Darren Rademaker spent a good chunk of the '90s making noise with their band Further. (Not to be confused with Grateful Dead offshoot Furthur.) Having survived life in slick major label band Shadowland in the late '80s, the Rademakers discovered Dinosaur Jr and did a sonic about-face, releasing a string of singles and albums from 1992 - 1996 on labels like Bongload (home of Beck's "Loser") and Creation imprint Ball. (They also actually toured with Dino Jr. which Lou hoped would annoy J Mascis.) All of their discography is out of print but a new compilation titled Where Were You Then? will be out next week (9/2) via Bad Paintings that cherrypicks 13 tracks from their 7" and EP releases. (Order yours.) We're premiering a stream of the whole compilation which you can listen to below.

Meanwhile, the Rademakers will be out with The Tyde opening for Christopher Owens on a few West Coast dates of his fall tour. The Tyde haven't played the East Coast since CMJ 2006. Those dates are listed, along with the Further compilation stream, below..