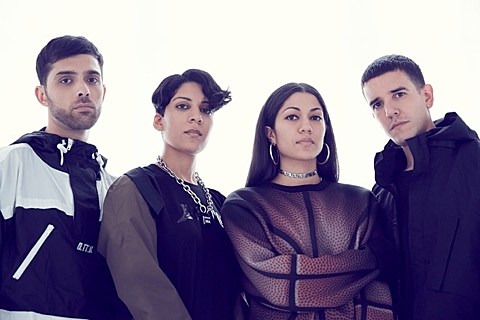 Back in 2013, electronic producers Fatima Al Qadiri, Asma Maroof and Daniel Pineda of Nguzunguzu and Lit City Trax's J-Cush formed the collaborative project Future Brown, and now they're set to release their self-titled debut album on February 24 via Warp. The album features previously released singles "Talkin Bandz" and "Wanna Party," as well as brand new single, "Room 502," the latter two of which feature Chicago rapper/singer Tink. The group's forward thinking production and Tink's vocals are a perfect match, as you can hear for yourself below. The album also features Kelela, Ian Isiah, Sicko Mobb and others. Tracklist below as well.

Tink's been working with other interesting collaborators lately too, including Sleigh Bells on the song "That Did It," and Kitty, Sasha Go Hard and Ryan Hemsworth on the song "Spotless." Stream both of those, with the Future Brown songs and tracklist, below...

Sleigh Bells - "That Did It" ft. Tink