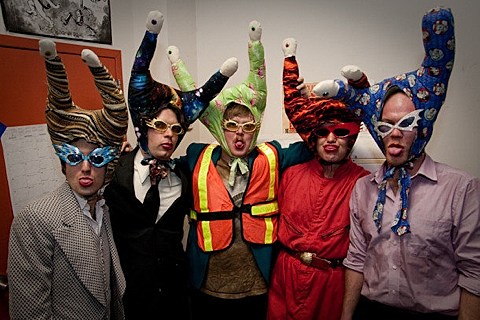 Future Islands singer Samuel T. Herring and guitarist/bassist William Cashion have another band called The Snails. Back in 2013 they put out an EP called Worth The Wait, and this week they released the Christmas song "Snails Christmas (I Want A New Shell)." It definitely scratches a similar itch to their main band (just with more snail themes). Stream both below. As their bio points out, they're planning to release their debut album Songs From The Shoebox in March...

The Snails formed in Baltimore in the summer of 2008 to play a birthday party for Spank Rock. Originally just an Art Lord & the Self-Portriats cover band in snail costumes, the Snails slowly began writing their own material. In 2013, they released their debut EP, Worth The Wait, a 5-song gatefold double 7" on Friends Records. In March 2016, they will release their first full length album, Songs From The Shoebox.

The Snails have 2016 shows coming up, including two in NYC: March 9 at Baby's All Right and March 10 at Mercury Lounge. Tickets for Baby's and Merc are on sale now. All known dates are listed below.

The Snails are not to be confused with the Philly ska band of the same name who are opening for The Slackers at Irving Plaza on 12/19 and Slackers' Vic Ruggiero's solo show at Grand Victory on 12/30.