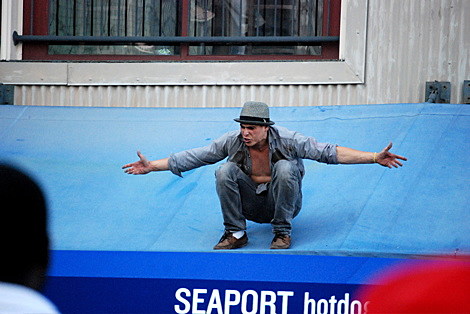 After a concert at the South Street Seaport last week was canceled when an over-capacity crowd for the rapper Drake and the pop band Hanson became rowdy and aggressive, the Seaport's owner has canceled two more planned concerts there, including a show by Kesha, the pop singer who has one of the biggest songs of the year.

In a letter to Community Board No. 1 of Manhattan sent on June 16, the day after the show, a representative of General Growth Properties, the mall operator that owns the Seaport, said that it had "chosen to cancel any forthcoming concerts in conjunction with Paper magazine," which organized the Drake concert, where seven people were injured and two arrested. In an interview with The New York Times last week, David Hershkovits, an editor and publisher of the magazine, said the magazine had planned for two more shows this summer, by Kesha, the "TiK ToK" singer, and the New York band Ratatat. [NY Times]

So to reiterate, only Paper Mag shows at the Seaport are moving/canceled (and they were never even announced yet). All announced Seaport shows go on as planned. Those include River to River Fest's Seaport Music series (which kicks off with Apples in Stereo children's show on Saturday and continues with Woven Bones & Yellow Fever on July 2nd) and the Sound Bites Lunchtime shows that have been happening on Wednesdays (the last of which is June 30th with Toys and Tiny Instruments Band).

In related news, one of the "Play Me, I'm Yours" pianos is set up at the Seaport (and so far nobody has thrown it off a balcony or anything). Videos of people playing that (including J Roddy Walston and The Business) are below...