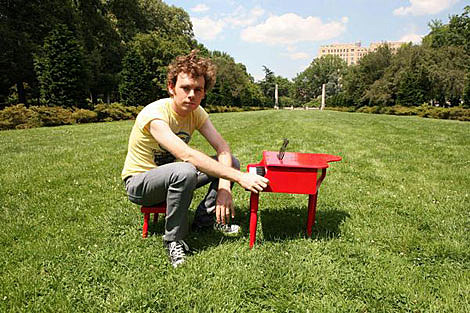 [Gabriel] Kahane is twenty-seven, and his listeners seem roughly the same age. He is well on his way to developing an original creative personality; his music absorbs everything from nineteen-twenties neoclassicism to blue-grass and modern indie pop, with potent melodies bridging the disparate styles. [New Yorker]

Kahane kicks off a residency at the Rockwood Music Hall on June 1st (tonight). He'll be there Mondays at 10pm through the rest of the month.

"Come hear the remarkably creative and talented singer-songwriter/pianist Gabriel Kahane, performing with a host of special and equally talented friends."

One of the singer's most well-known friends would have to be Sufjan Stevens, who appears on Kahane's eponymous 2008 disc. Kahane in turn is credited with "the piano cadenza on Sufjan Stevens' 'You are the Blood'" from the Dark Was the Night compilation.

Kahane's Craigslistlieder, a 2007 song cycle with lyrics compiled from Craigslist posts, has been re-released as a free download from Family Records. New single "LA" is streaming on MySpace.

All tour dates, with a video of Kahane performing Craigslistlieder material, below...