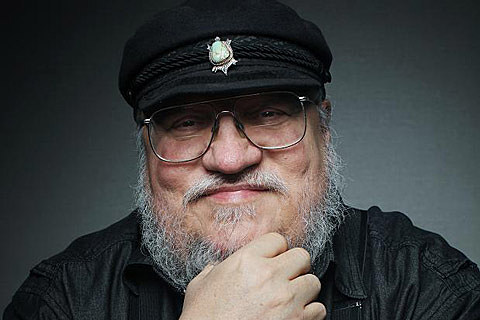 Author George RR Martin is releasing a new Game of Thones book on October 28. No, it's not The Winds of Winter, the next chapter in his extremely popular fantasy saga, but a compendium titled The World of Ice and Fire: The Untold History of Westeros and the Game of Thrones. Here's back of the book synopsis:

This lavishly illustrated volume is a comprehensive history of the Seven Kingdoms, providing vividly constructed accounts of the epic battles, bitter rivalries, and daring rebellions that lead to the events of A Song of Ice and Fire and HBO's Game of Thrones. In a collaboration that's been years in the making, Martin has teamed with Elio M. García, Jr., and Linda Antonsson, the founders of the renowned fan site Westeros.org--perhaps the only people who know this world almost as well as its visionary creator.

GRRM will be in NYC to discuss the new book, appearing at 92Y on October 26. Tickets include a signed copy of the book and go on sale today (9/5) at noon.

In other news, Martin seems to be seriously trying to crank out The Winds of Winter now that Game of Thrones is actually catching up to the books. He's not going to write an episode for the upcoming fifth season, like he usually does, so he can devote time to the novel. It is apparently already affecting things on the show -- SPOILER ALERT (kind of) -- as it's been announced that Bran and Hodor won't be in Season 5 at all (their storyline in S4 was largely pulled from A Dance with Dragons, the most recent book in Martin's series). Kristian Nairn, who plays Hodor, has said he'll use the time off to continue his DJ tour. Nairn will also be in NYC next month for NY Comic Con.